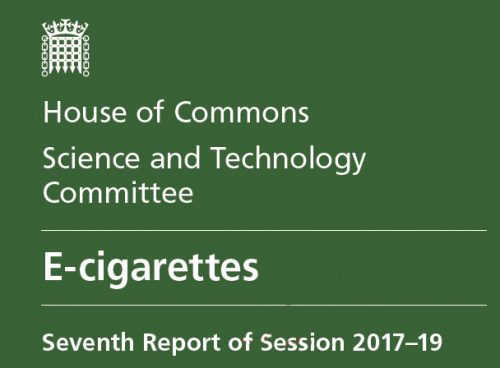 There is clear evidence that nicotine vaporisers (e-cigarettes) are substantially less harmful than conventional cigarettes and are a proven stop-smoking tool, according to a UK Parliamentary review which reported today.

The UK House of Commons Science and Technology Committee received over 100 written submissions and conducted oral hearings from expert bodies and specialists in the field and gave this advice to smokers:

‘Existing smokers should always be encouraged to give up all types of smoking, but if that is not possible they should switch to e-cigarettes as a considerably less harmful alternative’

The report says that smokers who switch to vaping are likely to have significant improvements in health.

Nicotine vaporisers are the most commonly used quitting aid in the UK. In 2016 it was estimated that 2 million smokers in England had used these products and completely stopped smoking.

According to the Department of Health, between 16,000 and 22,000 people successfully quitting smoking each year who would not otherwise have done so had they used nicotine replacement therapies or willpower alone.

The report supports regulating vaping differently to tobacco because of its far lower risk. This includes allowing vaping in public places, lower taxation than smoking and appropriate advertising of their health benefits to adult smokers. It also recommends the  more widespread use of vaporisers for people in mental health facilities.

The report provides a powerful message for Australian authorities which have placed a de facto ban on vaping. Although there are uncertainties about the long-term risk, the risks of NOT adopting vaping are much greater, as cigarettes are substantially more harmful, the report says.

Some other key findings