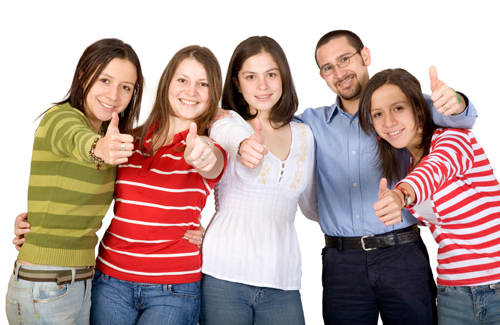 Vaping is helping millions of adult smokers to quit, yet there is a legitimate concern that it may lead young non-smokers to take up smoking. The latest study from the UK shows once again that this risk is not materialising.

The annual survey by Action on Smoking and Health UK of 2,291 11-18 year-olds found that use of vaporisers (e-cigarettes) is rare in young people and is almost entirely confined to current or past smokers.

Although 12% of young people had tried vaping, only 2% vaped regularly (at least weekly) and almost all of these were current or past smokers. 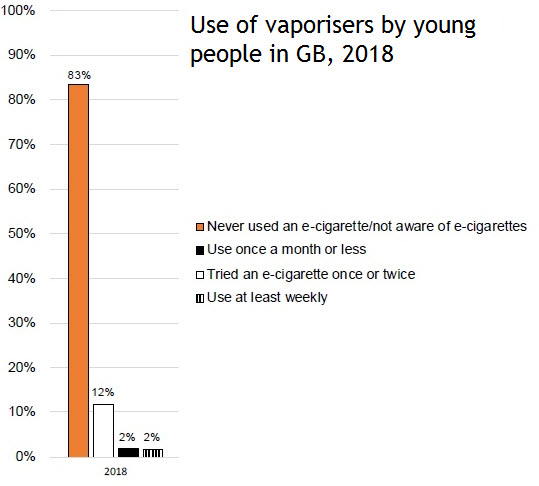 Of young people who had never smoked, 5% tried vaping once or twice, but regular vaping (weekly or more) was very rare, measured at 0% in this study. Occasional use by never smokers (monthly or less) was also rare, also measured at 0%. 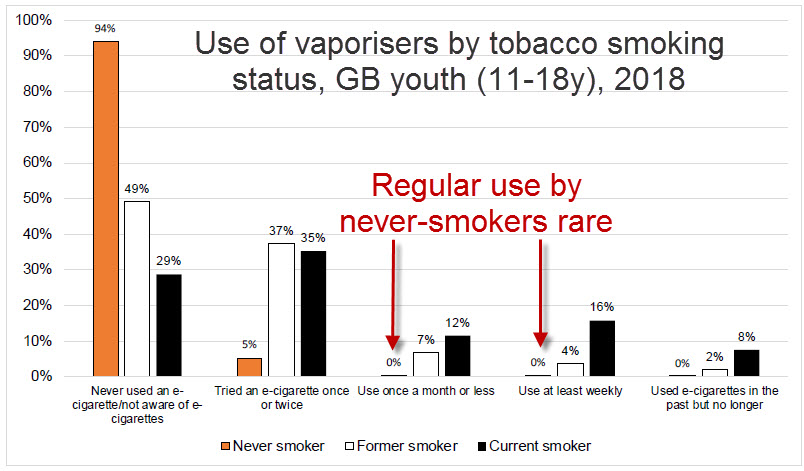 The main reason for trying vaping was curiosity (about 60%). The least common reason was that 'I think they are cool' (1-2%).

Comparison with other research

'Most e-cigarette experimentation among young people does not lead to regular use. Moreover, the rate of regular e-cigarette use in young people who have never smoked is very low. Regular (at least weekly) use of e-cigarettes amongst all young people surveyed was 3% or less. This was highly concentrated in those who also smoked tobacco'.

The UK research has similar findings to the US. In the National Youth Tobacco Survey 2015, less than 0.3% of young people who had never smoked were regular vapers (ie vaped >20days in a month). This study also found that regular use was almost entirely confined to current smokers.

According to ASH 'the latest Office of National Statistics adult smoking data shows that between 2011-2017 the largest decline in smoking prevalence by age group was among those aged 18-24 (25.7% to 17.8%). This means that despite more young people experimenting with e-cigarettes, and an increasing number using e-cigarettes before tobacco cigarettes, overall tobacco use continues to fall steadily'

The full report can be found here.