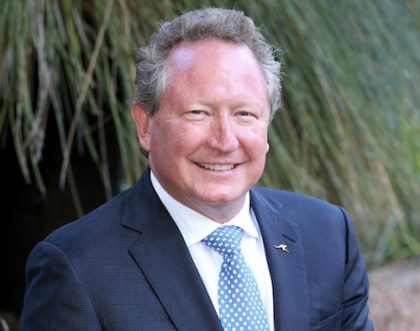 Andrew Forrest’s Minderoo Foundation is campaigning to reduce youth smoking rates and is to be commended for that.

However, in an interview with Alan Jones on 2GB yesterday 30 August 2018, it became clear that Mr Forrest has been misinformed on a number of issues.

ATHRA welcomes the opportunity to discuss these issues with him personally. Mr Forrest has publicly asked to see the science. Given the significant research to support vaping as tobacco harm reduction and the international data showing e-cigarettes do not lead to youth smoking, ATHRA is ready to present this to him in any public forum at any time.

Mr Forrest made the claim that ATHRA chairman Associate Professor Colin Mendelsohn was being paid by the tobacco industry. He said:

This claim is defamatory and totally without foundation. Colin has never and will never take any funding from Big Tobacco. All his advocacy work is self-funded, including trips to Canberra to speak to MPs, speaking at conferences and representing ATHRA.

Alan Jones made the following statement on 2GB this morning about Mr Forrest’s comments:

"I spoke yesterday to Andrew Forrest about, amongst other things, e-cigarettes. During the course of that interview Andrew Forrest mentioned Associate Professor Colin Mendelsohn.

I’ve interviewed him several times before – he’s the founder of the Australian Tobacco Harm Reduction Association.

Professor Mendelsohn says much of what Mr Forrest had to say was incorrect, including his claims that vaping is a Big Tobacco conspiracy to hook kids, and that vaping leads to an uptake of smoking in young people.

Professor Mendelsohn has also taken exception to Mr Forrest's claim that he’s “earned a few bob from big tobacco.” He says he’s never received any funding or payments from the tobacco industry, and all his lobbying is at his own expense.

The professor says Mr Forrest asked him to “put up the science” but says he’s already done that. He wrote to Mr Forrest's Minderoo Foundation in January and met the Foundation's chief operating officer, Bruce Mansfield, in April.

I thought it was important to put the record straight, which is why I’m telling you this now."

We disagree with Mr Forrest on a number of other points made in the interview. He claimed that:

‘Vaping is a Big Tobacco conspiracy to hook kids’

Big Tobacco didn't invent nicotine vaporisers and they own less than 20% of the vaping market globally. Vaping is a consumer-led grass roots movement invented in 2003. Big Tobacco moved into the market in 2012 and has been playing catch-up ever since. No vaping products made by Big Tobacco are sold in Australia.

‘Vaping leads to an uptake of smoking in young people’

Recent reports from the United Kingdom and United States show that regular vaping by young people is very rare and is almost exclusively confined to current or past smokers. Most vaping is experimental and short-term. In the US, smoking rates in young people are declining at an unprecedented rate. In Australia, the CSIRO recently reported, ‘Less than 1% of never smokers have used e-cigarettes on a more intensive basis than once or twice' (p229).

Large studies have shown that daily vapers are 3-8 times more likely to quit than those not using vaping products (see here and here). National surveys have reported that many millions of smokers have quit by vaping, over 6 million in the European Union, 2 million in the United Kingdom and 2.6 million in the United States. According to the UK Royal College of Physicians, randomised trials with early models have shown that vaping approximately doubles the likelihood of quitting (p103)– however modern devices are more effective .

Nicotine is ‘very bad for you’

Nicotine is addictive but has relatively minor harmful effects (except in pregnancy). According to the UK Royal College of Physicians ‘At commonly used dose levels, short-term nicotine use does not result in clinically significant harm’ (p58) and ‘the long-term adverse effects of nicotine are likely to be minimal’. (p79)

We welcome the opportunity to work together with Mr Forrest and the Minderoo Foundation on our common enemy, combustible tobacco products.