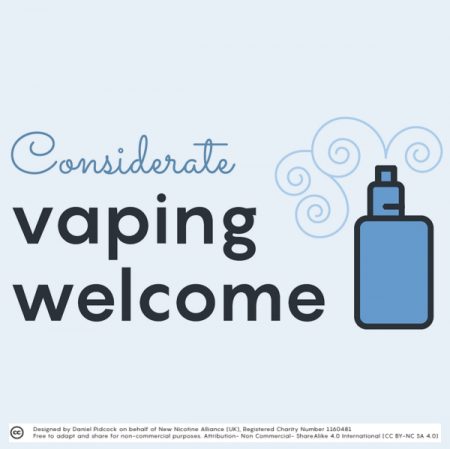 Vaping could be the solution for public smoking bans

The proposed smoking bans in North Sydney’s CBD and Canberra’s public spaces are based on good intentions. Secondhand smoke is unpleasant and harmful to bystanders. However, smoking is a powerful addiction and smokers need their regular nicotine fix.

One solution that could satisfy the needs of smokers and bystanders is to encourage vaping as a safer alternative.

Vaporisers (e-cigarettes) are battery-operated devices that heat a liquid nicotine solution into an aerosol that the user inhales. Vaping provides the nicotine that smokers are addicted to but with only a tiny fraction of the toxic chemicals.

Most of the harm from smoking is due to the tar, carbon monoxide and 7,000 other toxic chemicals produced by burning tobacco leaf. Vaporisers do not contain tobacco and there is no combustion or smoke. According to the UK Royal College of Physicians and Public Health England, vaping is at least 95% less harmful than smoking

This solution would be fair to bystanders. Unlike secondhand smoke, the risk from ‘passive vaping’ appears to be minimal. Negligible amounts of nicotine and other chemicals are released into the air when the user exhales. Furthermore, the vapour evaporates almost immediately (within 10-15 seconds) after exhalation, unlike cigarette smoke which persists in the air for 30-45 minutes. A gentle whiff of butterscotch or blueberry is unlikely to worry most passers-by.

It would also be fair to smokers who need their nicotine hit. Most smokers have tried and failed repeatedly to quit smoking and need a regular supply of nicotine throughout the day. Many find it hard to function without it.

Vaping provides nicotine and the behavioural rituals of smoking. It gives a ‘smoking-like’ experience, with the familiar hand-to-mouth action and sensations of smoking, without the thousands of chemicals found in cigarette smoke. It is also likely that many smokers who try vaping will make the switch permanently and stop smoking completely. This would be a great boost for public health.

The local federal member for North Sydney is likely to be very supportive of this proposal. Trent Zimmerman MP chaired the recent Parliamentary inquiry on vaping which reviewed the evidence and overseas experience in great detail. While the Inquiry voted mostly along Party lines to oppose vaping, Mr Zimmerman and two other liberal party MPs broke ranks and argued strongly in favour.

In their ‘Dissenting Report’, they stated

‘on balance, the weight of evidence indicating that using E-cigarettes is less harmful, potentially significantly so, than smoking tobacco cigarettes. As such, while E-cigarettes could be harmful, they are a better option than smoking and their use could save many thousands of lives.’

There is growing evidence that vaping helps some smokers quit. Millions of smokers have switched to vaping overseas and personal vaporisers are now the most popular quitting aid in the United Kingdom, the United States and the European Union. Modern devices can provide the same level of nicotine as tobacco cigarettes and can relieve urges to smoke and nicotine withdrawal symptoms.

Vaping nicotine is legal in Australia if the user has a nicotine prescription from a medical practitioner.

Vaping would help resolve the dilemma of public smoking. It would create a safer environment free of toxic tobacco smoke and allow smokers to get their regular nicotine fix. Smokers who transition completely to vaping would have substantial health benefits. That sounds like a win-win!