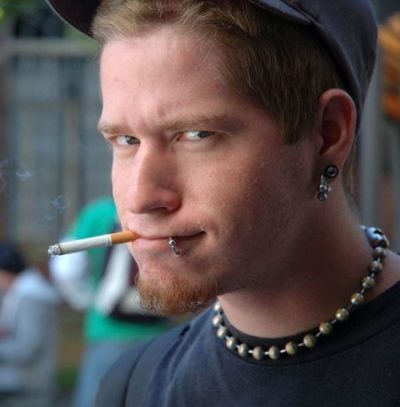 The long-term decline in smoking rates in youth and young adults has ACCELERATED in the US since vaping became popular in 2014, according to a new study in the journal Tobacco Control today.

The study combined the data from five large population surveys of 15-25 year olds in the US from 2004(listed below)*. It was performed by leading researchers Professors David Levy, Ken Warner and Australian Ron Borland and others.

The study demonstrated that the smoking rate in 15-21 year-olds in the US fell three times faster after vaping became popular in 2014 than the long-term trend prior to that. 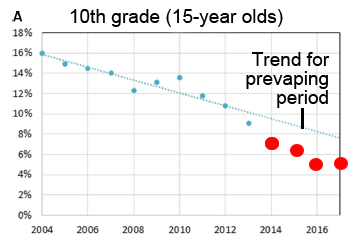 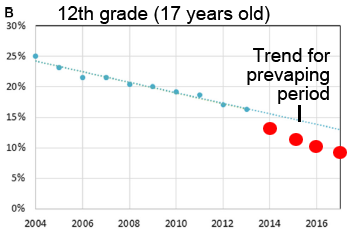 The fall in smoking in 22-24 year-olds was twice the long-term trend.

The most plausible explanation for this unprecedented change is the uptake of vaping.

It is very likely that vaping is acting as a far less risky diversion from smoking for many young people who would have otherwise smoked. Some young people who smoke are also using vaping to quit.

Making vaping more accessible may lead to a few more young people vaping. But surely that’s better than them starting on combustible cigarettes – especially now that we know (1) most young people vape only briefly and very few progress from vaping to smoking and (2) youth smoking rates go down in countries that allow vaping

Prof John Britton, Director of the UK Centre for Tobacco & Alcohol Studies at the University of Nottingham, said about this study:

“This study demonstrates that the availability of electronic cigarettes in the USA appears to have contributed to further declines in smoking among younger and older smokers, and more specifically that any gateway effect into smoking is more than offset by the effects of vaping among young people who would otherwise have smoked, and use of electronic cigarettes as a gateway away from smoking.

“The figures show similar trends to those observed in the UK, where electronic cigarettes have contributed substantial public health gains, and will hopefully help to reassure US commentators who have to date emphasised the risks of gateway progression in advocating restrictive policies on electronic cigarette use.”

Similar trend in the UK

Official data from the Office of National Statistics in the UK shows a very similar trend there. Smoking rates in 18-24 year olds have plummeted since 2014 as vaping has become more popular. The rate of decline in smoking since 2014 is three times the trend prior to that. A similar decline has occurred in 16-18 year olds. 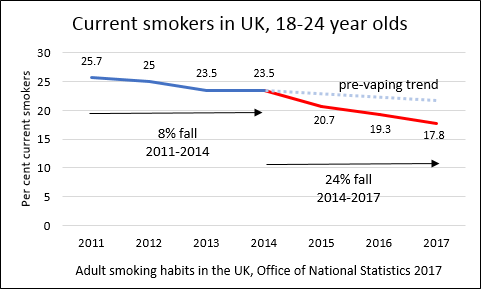 The findings challenge the relevance of the so-called ‘gateway theory’ which claims that vaping is leading young people to take up smoking. If a gateway to smoking exists, it must be trivial. More likely is that vaping is a motorway OUT of smoking.

While there are likely to be some young people who take up smoking as a result of vaping, this effect is swamped by the positive impact of vaping.

Some young smokers are also using vapes to quit.

Keeping our eye on the prize

The primary concern of public health is the rate of youth and young adult smoking rates. Smoking causes the premature death of two in three long-term smokers, or over 8 million people per year globally. On the other hand, vaping is a far safer alternative to smoking and is at least 95% less risky.

It is likely that vaping is playing a valuable role in helping to reduce smoking in young people as well as adults. If smoking rates are falling dramatically, we are winning.

This is a win-win for public health.

Levy D et al. Examining the relationship of vaping to smoking initiation among US youth and young adults. Tobacco Control 2018

the FDA doesn't care, Scott Gottlieb made that clear in a recent tweet when he said "Even if kids are using e-cigs instead of cigarettes – and that migration in part accounts for the decline in youth cigarette use – that's still not an acceptable trade".