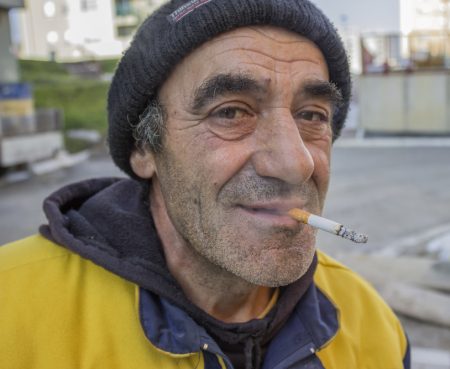 Smoking rates continue to stagnate or increase in Australia, while falling faster than ever in many other countries. This was confirmed in the recent release of the official Queensland smoking rates by the Chief Health Officer. The smoking rate in Queensland has not changed over the past two years. One in six Queensland adults, or 15.8% per cent of the population still smoke.

The Queensland trend reflects the poor progress nationally. There was no significant decline in smoking rates in Australia from 2013-2016 for the first time in decades. State surveys since then have shown no improvement. In fact, the most recent surveys from NSW and South Australia found that adult smoking is RISING. 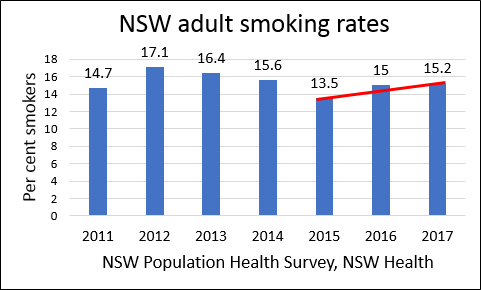 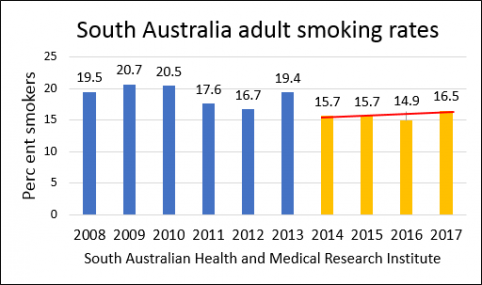 The adult daily smoking rate in Western Australia has not changed since 2014. 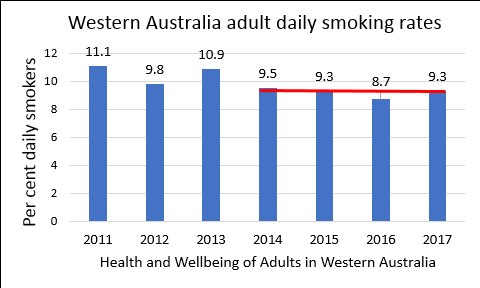 Health and Wellbeing of Adults in Western Australia. Health.wa.gov.au. 2012-2017

This is very worrying as smoking remains the leading modifiable cause of death and illness in Australia and we are clearly losing the battle to contain it. Australia was a world leader in tobacco control for many years, leading the way with innovative strategies. However, this has all changed and new strategies are now needed.

The major difference between Australia and other high-income countries is Australia’s ban on tobacco harm reduction strategies, ie the use of safer nicotine products like vaporisers (e-cigarettes), Swedish snus and heated tobacco products for smokers who are unable to quit. Of the 37 OECD countries there are only three that ban vaping, Australia, Japan and Mexico. 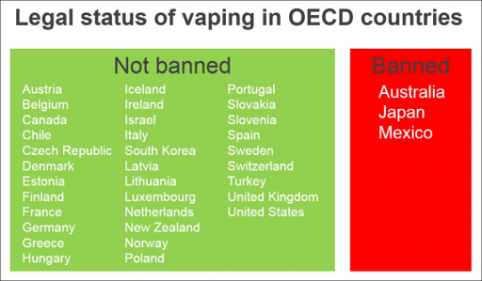 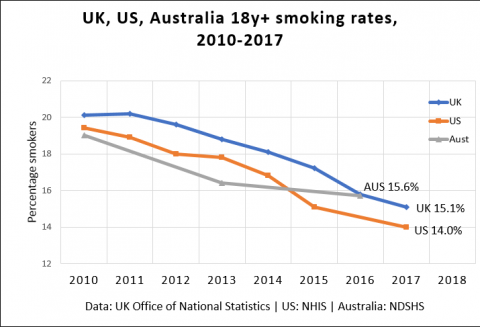 There is good evidence that smokers switching to vaping is contributing to this rapid decline. According to the UK Royal College of Physicians, vaping is at least 95% less harmful than smoking.

The smoking rate in Norway fell by half from 22% to 11% between 2007-2017 due to the widespread uptake of Swedish snus, a low-risk, moist oral tobacco product, which is in effect banned in Australia.

Heated tobacco products have led to a 25% fall in cigarette sales in Japan over the last two years (p55). These tobacco products are heated to release nicotine, but without combustion and are around 90% safer than smoking. However, they are also banned in Australia.

Australia is increasingly out of step with the rest of the world on tobacco harm reduction. Two out of every three smokers will die prematurely from smoking. We need to urgently make safer alternatives available for smokers who cannot quit. Not doing so is costing Australian lives.

One Reply to “Australia falls further behind in tobacco control”

If only they would allow snus in Australia. This has the potential to significantly reduce smoking rates yet our government won't allow the leagl sale of it.