First ever “Switch to vaping” campaign launched in Australia

The first ever Australian campaign that encourages adult tobacco smokers who can’t or won’t quit to switch to vaping to reduce the harm from smoking has been launched today in Australia. Many smokers will try to quit as a New Year's resolution but most will fail. Vaping allows smokers to enjoy an experience similar to smoking, with a greatly reduced risk of harm and reduced cost.

The campaign - “Switch2Vaping” - has been developed by the Australian Tobacco Harm Reduction Association at a time when data from Australia’s latest National Health Survey confirms that smoking rates have plateaued in Australia.

According to the national survey this month, 15.2% of Australians adults smoked in 2017-18 compared to 16% three years ago. These findings are consistent with other Australian national and state surveys which have shown that smoking rates have stagnated nationally since 2013 or are rising in New South Wales and South Australia.

ATHRA believes the time has come to try new approaches and to educate Australian smokers about the health and financial benefits that would result from a switch to vaping.

If current smokers who can’t or won’t quit are able to make the transition to vaping, then the evidence is quite clear. They’ll feel better, save a lot of money and expose themselves to much less harm than they do by smoking cigarettes.

Vaping is the most popular quitting aid in the United Kingdom, United States and European Union and has helped millions of smokers quit. This option should also be available for Australian smokers. Vaping is not risk-free, but scientists agree that it is far less harmful than smoking. 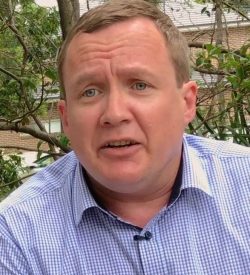 Michael Collins (right) from Ryde in Sydney features in one of the vignettes prepared for the campaign. He switched to vaping in mid-2018 and says the benefits have been significant.

This is acting as a major barrier to smokers accessing what is clearly a less harmful alternative to cigarettes.

I'd really like to know how one goes about getting a prescription when doctors don't seem to know what I'm talking about or where to look.
I have not encountered one person who has obtained a prescription for nicotine from their regular GP.

Hi Sharon,
Unfortunately GPs are reluctant to prescribe nicotine because of the opposition of the medical, health and government bodies. There are a handful of GPs in Australia who are willing to help. If you write to me at colin@athra.org.au I can give you more information.

Smokers who can't quit have a choice of either dying from smoking (2 in 3) OR breaking the law and vaping illegaly. Many choose the latter. They should not be put in this position.

This is one of the greatest campaigns to save lives in the history of Australia. Kudos to ATHRA for taking the initiative to help people make the switch from smoking to vaping, which has been proven worldwide to be a significantly less harmful choice. Make that New Year's resolution now!

I switched from cigarettes to vaping 5 years ago this Christmas & haven’t looked back since, the health benefits are immense.

Hi Sharon,
You can get a prescription from the Nicopharm website.

I live in Austria, EU and I'm a vaped. After 43 years of smoking 2 packs of cigarettes per day and countless tries to quit I finally made it – with the help of a vape device. Therefore I was quite shocked to read that Australians need a medical prescription to be able to buy vape juice containing nicotine. And I wondered: Are you allowed to buy cigarettes in Australia? Do they contain nicotine? Do you need a prescription to buy nicotine replacement products like patches and gums? I don't understand this law. How do they justify such prohibitions? Surely the public must see how unjust this restriction is…