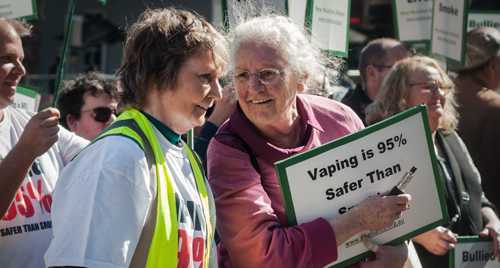 How many adults vape in Australia?

In spite of the legal restrictions on vaping nicotine in Australia, 227,000 or 1.2% of the population aged 18 years or above reported current vaping in 2016.

The report was published this week in the journal Addictive Behaviors by Queensland researchers, and analyses data from 22,354 people in the 2016 National Drug Strategy Household Survey.

The authors note that

Australia 'remains the only westernised democracy that prohibits the sale, and possession or use of non-therapeutic nicotine containing e-cigarettes'

Essentially, smokers who are unable to quit have a choice of continuing to smoke with all the risks of disease and death from smoking, or breaking the law and vaping nicotine to reduce their risk. Citizens should not be put in this position.

The historical decline in smoking rates has stalled in Australia since 2013 and new and effective strategies are needed. Vaping has the potential to help many smokers quit.

The role of vaping was confirmed by a recent randomised controlled trial which found that vaping is almost TWICE as effective as nicotine replacement products such as the nicotine patch and gum.

Vaping rates are much higher in countries where nicotine for vaping is legal and supported. For example in the United Kingdom, 6.2% of adults vape and in the United States 4.5% vape.

The higher rate of daily vaping in Indigenous people suggests that vaping may be helpful in reducing Indigenous smoking rates, which are THREE times higher than non-Indigenous rates.

The same applies for smokers with mental illness who also have high smoking rates.

Chan G et al. Correlates of electronic cigarette use in the general population and among smokers in Australia. Addictive Behaviors 2019

3 Replies to “How many adults vape in Australia?”

Legalise Vaping will definitely help out the disadvantage people in Australia. As just about every time I go to the shop's I'm approached by people on the pension begging for money for cigarette's.
I feel sorry for them.

I'm a 66 year old Australian male who has smoked since my teenage years, tried all of the expensive nicotine replacement products without success until now. It's been 9 months since I started vaping nicotine content juice. I have not had a cigarette since I started. My chest is clear, my chronic cough is gone, my skin is better, my aerobic capacity has increased, my blood carbon monoxide levels are normal, no more polluting butts, smelly ashtrays and my grandkids say I don't smell bad any more. All that without mentioning the financial savings. I would be very hard pressed to spend even half the money on vaping that I spent on cigarettes.

Queensland's ex-politician Lawrence Springborg and Labor's Cameron Dick have a lot to answer to, for making vaping illegal, neither one have the Kahuna's to speak up know for their death causing stance. Then there is the current government's (un)health(y) minister, Greg Hunt, how has insulted foreigner V.I.P's because he will not accept any answer he doesn't want to listen to, unconcerned about people's health is what it is. I am hoping there is enough good people in the Division of Flinders, Victoria, that will not accept Mr. Hunt's behaviour, to not listen to his constituency nor accept the insults on behalf of Australia towards foreign world leading V.I.P.'s and vote him out in the upcoming election in May.