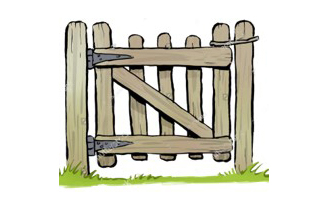 Australian researchers claim to have found the mythical gateway!

Australian researchers recently set out to prove that vaping increases the risk of smoking (the gateway theory) in young adults. The study did not find evidence to support the pre-determined conclusion, but the researchers claim to have shown it anyway.

The study was published this week in the International Journal of Health Policy by researchers from the School of Psychology at Curtin University in Western Australia.

Researchers questioned 519 non-smoking young adults (18-25 year olds) online and found that 20 (twenty) had used an e-cigarette once or more in the last month. This group were more curious about smoking, more willing to smoke and had a greater intention to smoke than those who had not used an e-cigarette.

Based on this they conclude that using an e-cigarette may increase the risk of starting smoking later on:

Based on the unproven assertion that vaping increases smoking uptake, the researchers go on to argue that e-cigarette availability should be restricted to 'minimise initiation of tobacco smoking in young adults'.

What this study actually shows is that young people who vape are predisposed to try smoking, just as they are more likely to try alcohol, cannabis and other risky behaviours. It shows only that the two behaviours are associated, most likely due to a common predisposition ('common liability').

The authors claim to have controlled for 'confounders', or other predictors of vaping and smoking uptake. However, this does not eliminate all factors and residual confounding is inevitable. See here for a more detailed explanation of confounding.

Exaggerated claims from a tiny sample

The study media release makes the alarming claim that 'three in five Australian young adults who currently use e-cigarettes are likely to initiate tobacco cigarette smoking in the next six months'.

This implies that vaping will cause a massive shift to smoking, however it is based on a sample of only 20 young people who used an e-cigarette once or more in the last month, of whom 12 were found to be more susceptible to take up smoking than non-users. This group was only 2% of the total sample used in the study!

The theoretical claims in this paper are incompatible with what is occurring in the real world. If vaping was causing more smoking in young adults as claimed, we would expect to see increasing smoking rates. In fact, we are seeing the opposite.

In countries where e-cigarettes are widely available, smoking rates are falling in young adults much faster than where vaping is banned or discouraged. It is more likely that vaping is diverting young people away from smoking. 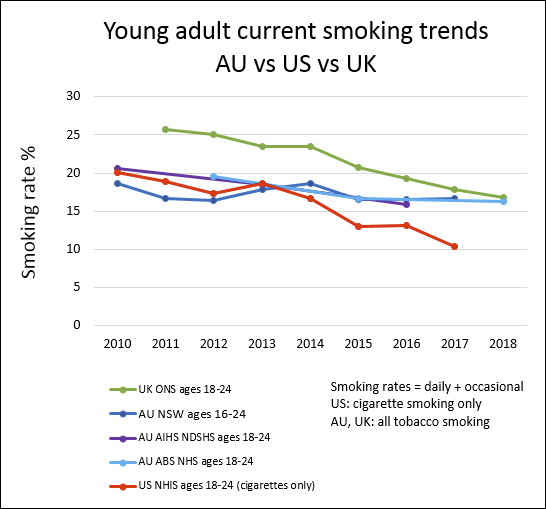 For example, in the UK which has the highest rate of e-cigarette use in the world, the rate of smoking by young adults is plummeting (green line). In the US, young adult smoking rates are also falling rapidly (red line). However, in Australia where vaping is banned, smoking rates in young adults have changed very little in recent years (blue lines).

It is disappointing to see this sort of spin on Australian scientific research. Researchers should present a factual account of what is actually found, not what the authors were hoping to find based on their prior beliefs and ideology.

Jongenelis MI. E-cigarette use is associated with susceptibility to tobacco use among Australian young adults. Int J Health Policy 2019

Commentary by Clive Bates on PubPeer

One Reply to “Australian researchers claim to have found the mythical gateway!”

Honestly so sick of hearing about vape increasing the risk of people taking up smoking thats just absoulute bullshit.But i have first hand seen the amount of freinds who have given up life time on the fags and have taken up vaping and are feeling so much better why arnt studies done on them the ones who have given up the fags for vaping i would like to see that .