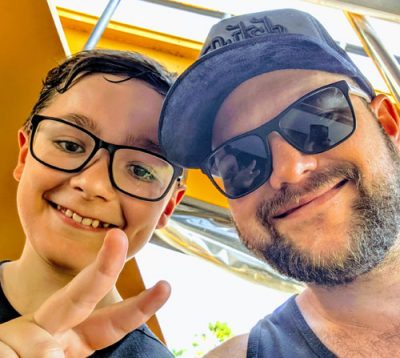 My journey to a smoke-free life – Rikki’s story

Let me start by thanking ATHRA and A/Prof Colin Mendelsohn for all their hard work in bringing this life-saving technology to the awareness of the public.

My journey started with a phone conversation with a childhood friend. He had mentioned he hadn’t smoked in years, and I was intrigued as to how he had done it. He told me he had used a vaporiser, and offered to send me one of his through the post. As soon as I tried it I was sold. For me it was a perfect fit, and instantaneous.

The effectiveness really blew me away. The cigarette I had finished before I used that vape for the first time was to be my last. Rather than the harsh taste of tobacco I was treated to a grape flavoured e-liquid.

I had tried many other methods to quit, the longest period being 6 months over a 17 year period, I had surrendered myself to an early grave

Over the following weeks not having a cigarette was almost effortless and I kept myself enthused by trying different flavours. The flavours really helped distance me from the still fond memories and flavour of cigarette smoke.

While I used a vaporiser my wife Melanie was still smoking, but it was a matter of days before she was using the device as much as me, and we purchased one for her as well (which was and still is illegal in WA). She had the same results as me, it was instant.

Soon enough all our friends had been converted - it was a 100% success rate and we were all previously heavy smokers. Before long I no longer knew a single smoker. It was remarkable!

I started to notice my health improving, I was no longer out of breath, I didn’t feel dizzy after strenuous work, and I no longer got lung infections which had been a regular event for me. My diabetes improved and before long I had joined the gym and was running daily. I started a Facebook page to connect with more people to understand and spread news about vaporisers and quit smoking methods.

I started buying batteries for the devices because people seemed to always need them, and I didn’t want to see them default back to smoking without them.

One thing led to another and soon people were calling me 'the vape guy'. And that led us to where we are today, owners of a vape store in Kalgoorlie WA

There are a lot of obstructive laws in this state which makes it very difficult for people to make the switch, and regulations on what products we can sell, which obviously has an impact on the profitability of a business. My wife and I still work full-time jobs and spend every spare minute doing our best to help people get off cigarettes any way we can.

The sad fact is our town has an extremely high concentration of smokers particularly extremely low-income people who are still being choked by addiction. The debilitating taxes and lack of effective government endorsed quit smoking methods has left them abandoned and ignored, it’s a daily routine for them to scavenge the gutters for discarded cigarette butts and beg for cigarettes or money to buy them.

Often, they live on the streets and yet still they can’t escape the debilitating addiction of tobacco. If only vaping was more accessible, I know it could be an avenue for them to reduce the harm to their health, and give them immense financial relief

I can’t emphasise enough the gratitude I have for organisations like ATHRA and Legalise Vaping Australia.