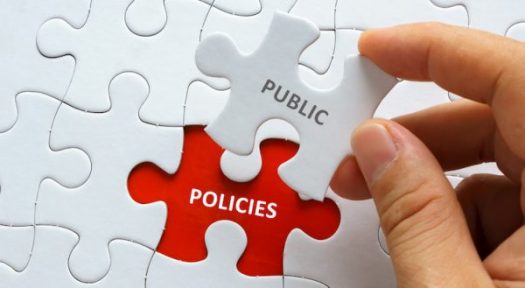 Australia is the only western democracy to ban the sale and use of nicotine for vaping. Australian policy is out of step with the scientific evidence and denies smokers who can’t quit a safer and potentially lifesaving alternative. There are better policy options available.

Australia is no longer a world leader in tobacco control. The decline in smoking in Australia has slowed considerably over the last 6 years in spite of plain packaging, the world’s highest cigarette prices and strict tobacco control laws.

However, in other western countries such as the UK and US, smoking rates are declining faster than ever, in a large part due to vaping (using an e-cigarette). (Figure 1) Vaping nicotine is the most popular and most effective quitting aid in the world, yet it is banned in Australia. Why? 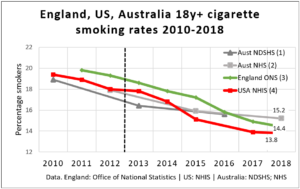 Most smokers want to quit. However, the reality is that many try and fail repeatedly, even with the best available treatments. Tobacco harm reduction is a pragmatic solution to reduce the harm in smokers who are unable to quit by switching to reduced-risk nicotine products such as vaping. It is similar to using methadone as a safer alternative for heroin users.

Vaporisers heat a liquid nicotine solution into an aerosol that the user inhales, delivering the nicotine the smoker craves but without the tar, carbon monoxide and other toxins that cause almost all the harm to health. A key misperception is that nicotine is the harmful component in tobacco smoke. Nicotine is addictive but is relatively benign. Long-term use has a health risk similar to caffeine.

Public health policy should be based on the best available evidence. In the case of vaping, the public debate is also driven by ideology, politics, vested interests, moral judgements and a hatred of Big Tobacco.

However, the scientific evidence is increasingly clear. Vaping is a safer alternative for smokers who are otherwise unable to quit and is an effective quitting aid.

According to the UK Royal College of Physicians, the risk from long-term nicotine vaping is unlikely to exceed 5% of the harm from smoking tobacco.

The recent outbreak of serious lung disease in the US was caused in almost all (if not all) cases by black-market THC oils, contaminated with Vitamin E acetate or other toxic ingredients. No cases have been linked to nicotine vaping.

A large randomised controlled trial found vaping was twice as effective in helping smokers quit as nicotine replacement therapy, such as patches and gum. Large population studies in the United States and United Kingdom show that vaping is increasing quit rates and is contributing to a rapid decline in smoking at a population level.

Yet there are potential risks. The main concern is that young people will take up vaping and become smokers. However, in spite of a lot of experimentation by teenagers, regular vaping is uncommon and is mainly confined to smokers, even in the US where some claim there is a “youth vaping epidemic”. In fact, youth smoking rates in the US fell twenty five per cent from 2018 to 2019 and it is likely that vaping is diverting some youth from smoking.

Opponents of vaping claim that the precautionary principle justifies a vaping ban. They argue that there are uncertainties about long-term risks, so it is best to delay the introduction of vaping. Being cautious to prevent harm sounds like a virtuous approach but in this case it will actually increase harm.

While the exact long-term health risks of vaping nicotine may not be clear for many years, the risks of tobacco smoking are well-known, with up to two-thirds of continuing smokers expected to die from tobacco-related diseases.

History has shown that prohibition is not an effective solution. It did not work for alcohol or the ‘war on drugs’ and it is not working on vaping. Prohibition pushes the problem underground, creating a dangerous black market with no control over quality or safety and will not stop access for young people.

The current laws are also ethically indefensible. The ban on vaping is a paternalistic policy that over-rides the autonomy of adult cigarette smokers. Vaping is a personal choice which causes no harm to others. Most experts agree that second-hand vapour, unlike smoke, causes minimal risk if any to bystanders.

It is hard to justify the widespread sale of deadly combustible cigarettes, while denying access to a safer, potentially lifesaving alternative.

A ban is an unnecessarily restrictive policy when a more nuanced approach would achieve a fairer and better public health outcomes. The legalisation and sensible regulation of nicotine liquid would allow access for addicted adult smokers who are otherwise unable to quit while reducing access to youth.

To reduce access for young people, the sale of vaping products should be restricted to suitable outlets such as vape shops, tobacconists or pharmacies, with strict age-verification and enforcement.

Laws should reflect the substantial risk difference between vaping and smoking. It is not appropriate to regulate vaping under the current strict tobacco control laws.

Sensible, risk-proportionate regulation with product standards, restricted sale to adults-only, restricted marketing, accurate labelling and child-resistant containers has led to great success in the UK. Regular vaping by young people who have never smoked is rare (<0.5%) and there are an estimated 3.6 million former adult smokers who now vape.

Government support for vaping, as in New Zealand and the United Kingdom encourages smokers to make the switch.

Taxation of vaping supplies should be kept to a minimum to maintain the financial incentive for switching.

Twenty one thousand Australians die prematurely from smoking every year. Australian policymakers should legalise nicotine and regulate vaping as a consumer product to provide a safer alternative for adult smokers who are unable to quit by other means. Access by young people could be restricted with sensible regulation.

Vaping is displacing large segments of the smoking market in many countries and has the potential to make cigarettes obsolete. This is an opportunity that Australia cannot afford to miss.

Colin Mendelsohn is a Conjoint Associate Professor in the School of Public Health and Community Medicine at the University of New South Wales, Sydney and a tobacco treatment specialist (www.colinmendelsohn.com.au). He is the Foundation Chairman of the Australian Tobacco Harm Reduction Association, a health promotion charity (www.athra.org.au).

If you are victim of Australias insane drug legislation fight back in any way you can. Drug war is a form of civil war, do not accept any government that makes war upon its citizens.

You are all part of the drug war now. Welcome to the fight.

If you are victim of Australias insane drug legislation fight back in any way you can.  Drug war is a form of civil war, do not accept any government that makes war upon its citizens.

Cannabis advocates have recently set legal standards Australia wide demanding that the drug war be considered to have the same legal context of any other type of war.  We encourage you to join us in the fight against this attack on everything it is to be and enjoy being  human.
Never stop fighting, never surrender.  Together we can win the drug war.

Hear hear! I have been vaping for 8 years with no harm to myself, my home nor the environment (chest x ray clear as a bell, windows clean and no smell to others passing by. )

The vast majority of people opposing vaping seem to come from the same narrow minded, holier than though sector that for years they have been able to flap their hands in the air, feign coughing and use such sneering gems of social comment as "I don't use tobacco".
Suddenly they are confronted by people enjoying a coffee (drug) or a glass of wine (drug) and gasp! a vape of Nicotine and their petty little world falls in a heap. They can still flutter their dainty fingers under their dainty noses and fake the cough, but I know that water vapour exhaled is way less carcinogenic than the diesel fumes emitted by the public transport that these sort of pinch faced idiots favour.

Thankyou!! The most informative article I've read so far..I will forward to as many people as I can.
I am a 61 year old female who smoked cigarettes from age 11 leading to a pack a day addiction. 9 years ago I started vaping nicotine and have not smoked a cigarette since. I had tried to quit for many years by going cold turkey, weaning off, hypnotherapy, acupuncture, patches, gums and 2 expensive stays at a health retreat detox..all unsuccessful. Once I started vaping I enjoyed all of the benefits of not smoking (taste and smell returned, skin cleared up, I didn't smell bad or cough constantly, I had real energy) but suffered none of the withdrawal symptoms (constipation, irritability, mood swings, body aches, lethargy but inability to sleep). It was for me a miracle!!
Due to our laws prohibiting the sale of nicotine liquid in the oil I have been importing nicotine in 100% form from NZ and mixing my own. I was horrified to hear of the recent proposed ban by Greg Hunt and even more worried when I tried to reorder and discovered none available worldwide due to the volume of orders from Australia over the weekend. One site claimed to have taken 10,000 in 24 hours from Australia!!
Thank goodness the ban will now not occur for another 6 months. I will stockpile what I can..though this is not my preferred option. I would recommend that pre mixed unflavored nicotine oil be available from vaping shops or tobacconists.
Thankyou again!!!

I don't know what is more depressing. Australia being such a nanny state – to put it in a nice way – that just won't let adults have the freedom of choice … or that the current policy on vaping seems to be comically detached from the goals it's trying to achieve.