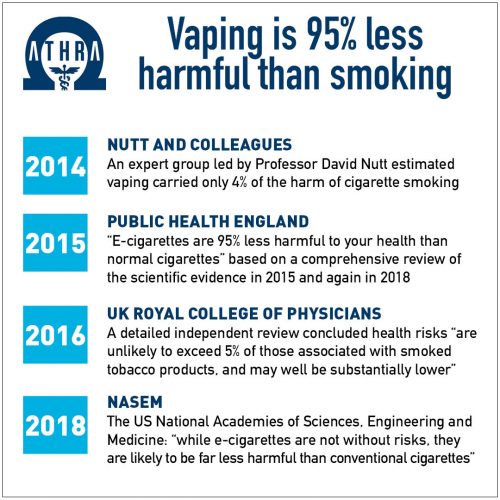 I smoked for around 20 years. I had problems breathing. My blood pressure was high. I could not taste or smell much. I stopped smoking and started vaping about 7 years ago. It didnt take long for me to notice a huge difference in the way I felt. Still I feel great. I'm able to outrun my young children. I can taste the food I'm eating. Now when I go to the doctor they say my longs sound great.

Ive smoked cigarettes for just over 40 years.I started e vapor only one month ago and already I have more energy better appetite smell and taste better.So that I don’t continue to crave nicotine I started on 12mg nicotine for two weeks then cut down to 8mg for the next two weeks.So far so good as the days go by I’m finding that I don’t need to vape as much as as I did when I first started vaping.I will keep yous up to date as I continue my mission to completely give up the vaping before that too becomes a habit.

Thank you for an honest and informed perspective.

Thank you for this! I am vaping now to stop smoking and am so glad to know it is safer!

When this pandemic came around last year, I was smoking off/on for over 45years, more on than off, when I understood that the covid 19 was a respiratory disease which attacked the lungs severely, I decided to quit, however, I also used a vaping pen and liquid to help me, I vaped heavily first week or so, after which I slowed down considerably, I now vape no more than 8–10 times a day, using strength 6mg, a 10ml bottle lasts about 10–14days.
I have never felt better, I breathe a lot easier, I can walk miles without getting out of breath, i exercise 4–5times a week, I eat better food and have a lot more energy, I think there is a lot to be said for vaping as opposed to smoking, also, although not necessarily the best part, but is certainly noticeable, I have saved a small fortune not smoking, literally,

Thanks for inspiring me Paul ,these fucking cigarettes got ahold of me and cancer runs rampid in my family.i can't seem to quit but I also found that vaping helps and I have been smoking around the same amount of time as you but I went back to smoking.After reading your words I aim to try again.i am a 47 year old male and just found a lump in my chest so I have to see the dr.my mom died at 55.!!!!! I can't smoke nomore so it helps to know someone else that had success.thanks again Paul and keep up the good work 👍

I switched from smoking to vaping two years ago, and immediately felt MUCH better. I’d made a list of troubling symptoms I had from smoking, and after switching to vaping they all completely vanished. Following my attempts to quit ALL nicotine in the past, I’ve always fallen into a clinical depression, and I never want to experience those moods again. I’m okay with remaining a nicotine addict (vaper) for the rest of my life if depression is my alternative, and the findings in this article make me feel better about the decision. (And who knows? Maybe someday I’ll be better equipped to quit ALL nicotine. For now, I’ll keep vaping.).

I’m hoping somebody can clear-up one thing, though. It says above there hasn’t been even one death from vaping in 15 years. We know about the EVALI outbreak of 2019 which killed roughly 70 people… deaths which, of course, were all tied to Vitamin E acetate in black market vaping products. Have there really been NO VAPING DEATHS besides those, in regulated vaping products? If so, that’s a very heartening fact, and I’d love to cite this when arguing against vaping critics who pester me to quit. Is there a better way to phrase the “not one death!” statistic, making it more accurate but still absolving me of my decision to vape?

What do you think about dual use of e-cig and cigarettes? Available scientific evidence points out how more than 70% of vapers also smoke conventional cigarettes (at least here in Italy) and smoking less cigarettes is an undeniable risk factor for stroke and cancer.

Daniel I say if vaping gets you to smoke less cigarettes even if you continue to use both it has to be a better outcome than just the cigarettes.good luck.

digivape published a news that vape is safer than cigar , you can check it in their website

While the evidence is not definitive, vaping is better than smoking, but still it poses less risks. This post and video has helped me understand that I need to stop smoking completely and vaping can help me to a certain extent. After some time, it is best to quit both these things. I would order my vaping kit now from the best vape shop NZ (https://momentumvapeco.co.nz/) and take a step to quit smoking. The post helped me. Thanks.

i was 13 years old when i started smoking, i smoked for 42 years and i had tried so many times to quit but always went back to smoking, the habit or dependence was just too strong, even when i had to have part of my right lung removed due to smoking damage i still could not quit for long.
then 7 years ago i found out about vaping and thought i would give it a try, i was amazed at how well it worked and i quit smoking on the first day of vaping and have not smoked now for 7 years, i am now 62 years old.
i feel so much better since i quit smoking, i can breath much better now even better then before i had my lung operation, food tastes so much better and my sense of smell is stronger, i can also do much more exercise without getting tired and out of breath too quickly.

The difference between smoking and vaping is that smoking delivers nicotine by burning tobacco, which can cause smoking-related illnesses, and vaping can deliver nicotine by heating a liquid in a much less harmful way. So we can justify that It could be safer than smoking.

I've been a smoker for slightly over 40 years. I've only been using e vapour for a month, but I already feel more energised, have a greater appetite, and my food smells and tastes better. To avoid craving nicotine, I started with 12mg nicotine for two weeks and then reduced to 8mg for the next two weeks. So far, so good. As time passes, I'm discovering that I don't need to vape as often as I did when I initially started. I'll keep you updated as I continue on my journey to quit vaping totally before it becomes a habit.
Thanks