THE LATEST SCIENTIFIC REVIEW of vaping nicotine has concluded it is an effective quitting aid for smokers and could substantially reduce smoking rates in Australia.

The peer-reviewed study by Australian academics Conjoint Associate Professor Colin Mendelsohn, Professor Wayne Hall and Professor Ron Borland was published in the scientific journal Drug and Alcohol Review today. It is the first analysis to specifically assess the potential for vaping to reduce smoking in Australia.

However, vaping is effectively banned in Australia and vaping rates are currently very low, only 1.2% in 2016. Vaping rates in other western countries are much higher: 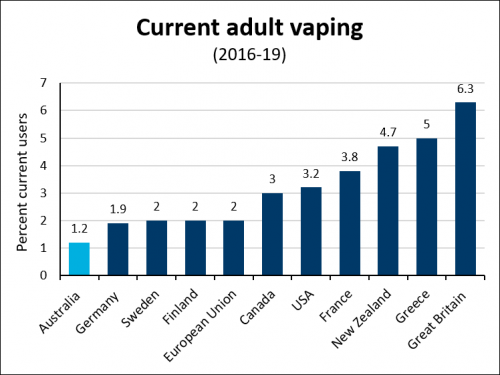 In countries where it is readily available, such as the USA and the UK, nicotine vaping has accelerated the decline in national smoking rates. This contrasts with Australia where the smoking rate has remained largely unchanged for the past six years.

This comprehensive analysis of the latest science shows that vaping could play a valuable role in reducing Australia’s stalled smoking rate and save lives.

The review coincides with the smoking cessation guidelines published this week by the Royal Australian College of General Practitioners which support vaping nicotine for smokers who are otherwise unable to quit.

Australia remains the only western democracy where it is illegal to sell and use nicotine liquid for vaping.  A balanced approach to regulation would allow access to vaping products for adult smokers who are unable to quit while restricting access to non-smokers and young people.

The stagnation of smoking rates in Australia means that we need innovative and effective quitting aids in addition to our traditional tobacco control strategies. Making vaping more easily available will improve public health and will save lives.

3 Replies to “Study confirms vaping will save Australian lives”

You might also add "common sense" to this well-articulated argument.

The products are much lower risk because they do not involve the combustion of organic material and vapour aerosols have much lower toxicity. The exposure to toxins is two orders of magnitude lower. The basic physics and chemistry mean the risks are obviously far lower compared to smoking.

People who use nicotine will turn to these products to avoid the ill-health, stigma and high cost of cigarettes if they provide a satisfactory user experience. It should not be a shock that people use these products to reduce the harms associated with smoking. It would be surprising, however, if as often claimed by anti-vaping activists, that people were using these products to increase their smoking.

These products are likely to be more effective as low-risk replacements for cigarettes. This is because they perform many of the functions that cigarettes do: a nicotine hit, sensory impacts, tastes, hand to mouth movement, behavioural ritual, lifestyle branding etc. They are obviously better designed to displace smoking.

The world should not lose its mind over adolescents trying these products. Adolescents try adult things. This should not be a shock. Most will be just experimenting, many will be doing this instead of smoking, and as youth risk behaviours go, vaping is among the most innocuous.

What is not at all obvious is the reason for the extraordinary large-scale and well-financed efforts to deny the obvious advantages of vaping and instead – as in Australia – to pursue prohibition and to mislead the public about the risks and benefits. In doing so, they are guaranteeing that nicotine for recreational purposes will be sold primarily in its most harmful form, cigarettes. They do not even understand how or why, but Australia's public health establishment is busy helping the cigarette trade slow down the inevitable disruption of the tobacco market brought on by vaping. What a waste. What a failure.

I picked up a vape two years ago after smoking for thirty years. Never smoked again. If we are serious about helping people to quit smoking then it’s a no brainer. Two other members of my family have exactly the same experience