Vaping continues to be a public health success in England

Vaping in England is almost exclusively confined to smokers and ex-smokers trying to reduce their harm from smoking. Vaping by young people who have never smoked is rare.

These were the findings from latest report from Public Health England released today which also found that smoking rates are continuing to fall rapidly and harm from vaping is rare.

The results from the UK shows how sensible regulation of vaping can improve public health.

The report reviewed 3 national youth surveys and found no evidence of a so-called “youth vaping epidemic”. It found that 5% of 11-18 years olds were currently vaping, but vaping was mainly concentrated in smokers. 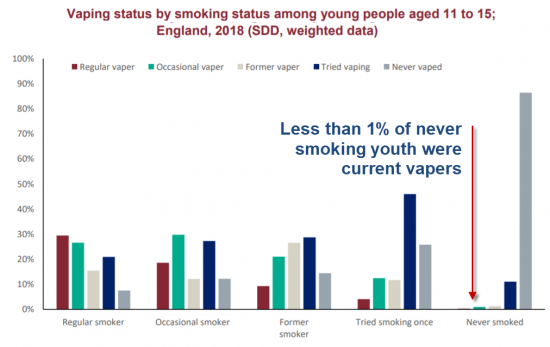 Current vaping among adults in England has remained stable between 5-7%, and most of these are smokers or ex-smokers.

Less than 1% of adults who have never smoked are current vapers, with the most recent data estimating this at 0.3%.

Vaping among former smokers continues to rise and was 12-13% in 2019. This suggests that many smokers have quit with vaping and are continuing to vape to prevent relapse to smoking.

Importantly, smoking among adults in England has continued to decline over the past 10 years and in 2019 was around 15%.

As in Australia, there is widespread misinformation about the risks of vaping. We know that vaping nicotine is dramatically safer than smoking, most likely at least 95% safer.

However in England, only 34% of people thought vaping was less harmful than smoking cigarettes. This misperception is largely due to alarmist media reports and misinformation spread by anti-vaping groups, eg here.

This is a serious concern as these “false fears” are preventing smokers from switching to vaping and will ultimately cost lives.