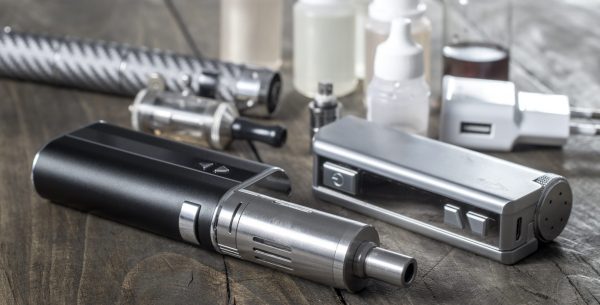 The survey by the Australian Institute of Health and Welfare is conducted every 3 years. In 2019, 22,274 Australians aged 14 and over were asked about their use of legal and illegal drugs. 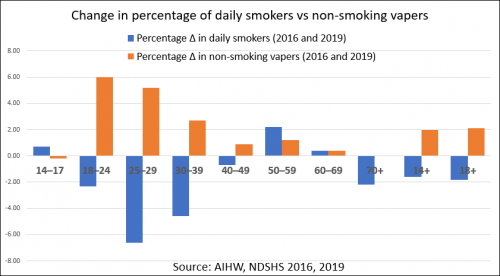 This fall in smoking rates coincided with a matching rise in vaping rates in this age group. It is likely that the increased vaping is contributing to the reduction in smoking in these age groups, either by helping smokers to quit or diverting those who would have otherwise gone on to smoking

It is not possible to say this association is causal (ie that vaping is the cause of the lower smoking rates) but the available research and overseas evidence suggests it is likely to be a major factor.

Importantly, it does NOT suggest that vaping is increasing smoking as claimed by some commentators. More likely, vaping is a gateway OUT OF smoking, as suggested increasingly by the research.

It is also important to note that there was a small, non-significant DECLINE in vaping in 12-17 year olds, suggesting that the community concerns about an ‘epidemic of youth vaping’ are exaggerated.

It is of great concern that smoking rates in people in their 40s, 50s and 60s remained unchanged since 2016. Two in three smokers in this age range will die from a smoking-related disease. Most have tried repeatedly to quit unsuccessfully and may benefit from vaping.

Vaping rates in this population were very low in comparison. Nicotine vaping should be available for these addicted smokers. Vaping is more effective and more popular than nicotine replacement products and could help to reduce smoking in the older population as it appears to have done in the younger groups in this survey.

Comparison with other countries

The adult smoking rates in Australia is now 14.7% but is declining much more slowly than the UK and US where vaping is readily available. 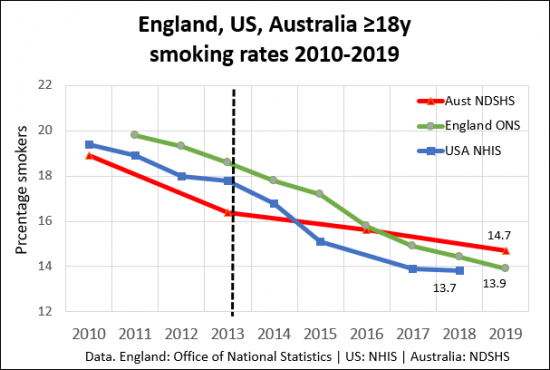 In Australia, since 2013, the decline has been 0.3% per year, less than half the rate of the other countries

These findings confirm that vaping can play a vital role in reducing smoking rates. The government's plan to restrict access further to nicotine vaping will lead to increased smoking, more deaths and bigger tobacco company profits.

We ask Mr Hunt to review these data carefully before taking any further action which may have unintended and negative public health effects.

I am a 69 yr old male vapor. I haved smoked since i was 14 yrs old, i have tried on many occasions to stop to no avail. I started vaping 7 months ago and since then i have stopped wheezing and don't cough anymore. Mr Hunt my health has improved since taking up vaping please do'nt force me back to the cigerette and ultimitly my death.

When I was a kid we smoked cigarettes, it seems Obvious to me that the kids vaping to day are the same group that would have been smoking today if vaping wasn’t around.
I don’t want my kids smoking or vaping but I’d definitely be happier if I found them vaping instead of smoking like we did.

I started smoking around 16, and tried to quit several times in my 20s, without success. In July, 2011, I received my first eCigarettes. I have never purchased cigarettes since. I stopping wheezing, and coughing up "lung butter", and I don't get puffed out from mild exercise. I shared my experience with friends and family, who smoked, and they're all on eCigs too, including my then-59-year-old mother, who had also been smoking since she was a teenager (and failed to quit many times).

Why can I go to any service station, or supermarket, and get cigarettes without question, but I need a doctor to prescribe "nicotine juice", and then I need to buy it overseas!?