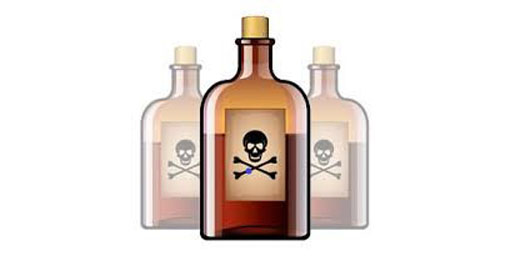 NICOTINE POISONING did not double in Victoria from 2018 to 2019 as stated by the TGA and Health Minister Greg Hunt. In fact, according to data released under Freedom of Information, there was no increase in poisoning at all in that 12 month period.

To justify the proposed ban on importing nicotine the Health Minister and the TGA claimed that “The Victorian Poisons Information Centre reported a doubling of liquid nicotine poisoning from 21 cases in in 2018 to 41 in 2019. The Minister's press release states:

However, the VPIC report shows that these numbers refer to phone calls, not poisonings. Furthermore, the actual numbers reported were 26 in 2018 and 37 in 2019, an increase of 42%, not a doubling.

More importantly the rate of significant poisoning did not change

Most calls did not require any medical treatment. Fourteen cases were referred to hospital in 2018 and 15 in 2019. One case was also referred to a GP in 2019.

Clearly Mr Hunt has been misinformed. As this was a major justification for introducing draconian restrictions on vaping, it is appropriate to review now whether this harsh plan is appropriate.

A far more effective solution to reduce poisoning risk is to regulate nicotine e-liquids. Because nicotine liquids are effectively illegal, there are no requirements for child-proof bottles or nicotine limits. In a regulated market, mandatory child-proof bottles, labelling and health warnings would be introduced. There would also be manufacturing and safety standards which would reduce risk further.

The tragic death of a child in 2018 was due to ingestion of highly concentrated solution of 10% nicotine from an open bottle while the mother was mixing her e-liquid. In a regulated market, most people would purchase premixed e-liquids at much lower concentrations, typically 0.3-3% in a child-resistant container. This death would have been avoided if nicotine liquid was legalised and regulated.

Nicotine liquid is classified as a Schedule 7 dangerous poison in the Poisons Standard, the same as arsenic and strychnine. However, low concentrations of nicotine used in vaping are relatively benign, even when ingested.

The vast majority of cases of swallowed nicotine result in prompt vomiting. About 25-45% of the swallowed nicotine that is not vomited is absorbed from the stomach into the blood and much of it is then broken down in the liver before getting into the system.

In the last 15 years, there have been only 4 deaths in children from accidental poisoning reported globally

This should be compared to an ANNUAL total of 8 million deaths from smoking globally. The overall effect of vaping is to dramatically reduce the harm from smoking.

According to Public Health England, nicotine is no more toxic than many other household chemicals and medicines. Instead of banning them, we use child-resistant containers, warning labels and public education. Nicotine liquid is no different.

Internationally, nicotine liquid poisoning is very rare. In the US in 2018, there were 3,140 calls to Poison Centres from nicotine in e-cigarettes, compared to a total of 2,524,733 calls in total ie 0.0012% of all calls. There were no deaths from nicotine but 1,351 deaths from other products.

In the UK from 2016-2019 there were 215 reports for side-effects or safety concerns from vaping products and 2 unconfirmed deaths. In contrast the stop-smoking drug varenicline was responsible for 1,741 calls and 9 deaths. Nicotine replacement therapies (gums, lozenges etc) were responsible for 875 calls and 5 deaths.

The message is clear. Low concentrations of nicotine used in vaping are relatively benign and should be available as consumer products

Nicotine liquids should be legalised and regulated to reduce the risk of poisoning and to ensure high quality products.

To reduce the risk of poisoning, we need to legalise and regulate nicotine e-liquids. Restricting access will only make things worse.

Over to you Mr Hunt.

It seems the singling out of nicotine is because of Hunts fixated views on it, in reality how many other dangerous chemicals are in a home? Drain cleaner under the kitchen sink, polishes , cleaners of all descriptions, all highly dangerous but not required to be locked away! In the laundry, we have acids such as hydrocloric and sulphuric for cleaning, poisinous soap powders and cleaners.
So I ask why single out nicotine?

Maybe Health Minister Hunt should be concentrating on COVID-19 instead of Vaping. He’s not doing a very good job of that so far . It’s obvious his main concern is how much tax he can get from vapers. If he concentrates on real health issues and leave our democratic rights alone, he may save lives.

I don't even know why he is the health minister, his background is not health based.
It is clearly evident that he has a personal agenda on the vaping/nicotine issues. Australia needs someone who is unbias and with at least a basic knowledge of health. Perhaps someone who is willing to look in depth at the issues instead of skimming the media hype up and reaching a totally wrong and unjust decision.

When he announced the nicotine ban in Australia he did it off his own back, this "law" did not pass through parliment and was not voted on – the democratic process was totally ignored. This act is sailing very close to dictatorship, or even worse communism.