First ever ‘switch to vaping’ campaign launched in Australia

The first ever Australian campaign that encourages adult tobacco smokers who can’t or won’t quit to switch to vaping to reduce the harm from smoking has been launched in Australia.

The campaign - “Switch2Vaping” - has been developed by leading Australian tobacco harm reduction advocates at a time when data from Australia’s latest National Health Survey confirms that smoking rates have plateaued in Australia.

According to the latest national survey this month1, 15.2% of Australians adults smoked in 2017-18 compared to 16% three years ago. These findings are consistent with other Australian national and state surveys which have shown that smoking rates have stagnated nationally since 20132 and are rising in NSW3 and SA4

According to Conjoint Associate Professor Colin Mendelsohn, Chairman of the Australian Tobacco Harm Reduction Association (ATHRA), the time has come to try new approaches and to educate Australian smokers about the health and financial benefits that would result from a switch to vaping.

“If current smokers who can’t or won’t quit are able to make the transition to vaping, then the evidence is quite clear. They’ll feel better, save a lot of money and expose themselves to much less harm than they do by smoking cigarettes,” said Dr Mendelsohn.

“Vaping is the most popular quitting aid in the United Kingdom, United States and European Union and has helped millions of smokers quit. This option should also be available for Australian smokers” Dr Mendelsohn said. “Vaping is not risk-free, but scientists agree that it is far less harmful than smoking”.

Michael Collins from Ryde in Sydney features in one of the vignettes prepared for the campaign. He switched to vaping in mid-2018 and says the benefits have been significant.

ATHRA Director Joe Kosterich says this is acting as a major barrier to smokers accessing what is clearly a less harmful alternative to cigarettes.

For more information about the campaign go to www.athra.org.au/switchtovaping 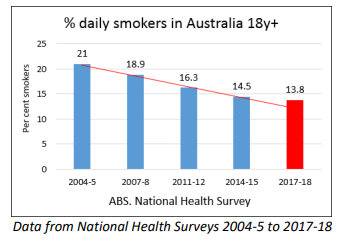 Australian Tobacco Harm Reduction Association (ATHRA) is a registered health promotion charity established to reduce the harm from tobacco smoking in Australia. ATHRA aims to raise awareness of less harmful alternatives for adult smokers who are otherwise unable to quit. ATHRA’s broader goal is to encourage the complete cessation of tobacco smoking in Australia. For more information, visit www.athra.org.au.

ATHRA is funded by unconditional donations from businesses and the general public. It does not accept donations from tobacco companies or their subsidiaries.

None of the directors has ever had any financial or commercial relationship with any electronic cigarette or tobacco company.