Dr Colin Mendelsohn, a Director of ATHRA, said that smoking tobacco was still the single greatest cause of preventable death and illness and [1] in 2019, while 14.7% of Australian adults continue to smoke this only represented a modest decline from 15.6% in 2016, with smoking rates for middle aged and older Australians remaining stagnant.

“We need to be doing everything we can to help Australia’s 2.9 million smokers quit the deadly habit which kills more than 21,000 Australians every year,” said Dr Mendelsohn.

“Figures show that older smokers are still struggling to quit and smoking rates from the age of 40 are essentially unchanged, with 61% of smokers trying to quit in the last 12 months, with the vast majority being unsuccessful.

“While smoking rates fell most in the twenties and thirties age group, which were also the age groups with the greatest increase in vaping, it is likely that vaping is assisting this group to quit smoking or is acting as a safer alternative.

“Vaping rates doubled between 2013 and 2016 overall in spite of the practice being essentially illegal in Australia. In 2019, 2.5% of Australians were current vapers (approximately 450,000 people), compared to 1.2% in 2016 with vaping more concentrated in younger populations.

“Around the world, we have seen the benefits of vaping nicotine to help adult smokers quit yet our policy makers continue to ignore the international experience and science. Smoking rates in the US, UK, Canada and EU continue to fall, in some cases faster than ever and vaping is playing a significant role”.

Dr Mendelsohn said that the UK Royal College of Physicians has concluded that long-term vaping is likely to be no more than 5%  of the risk of smoking [2]and vaping is actively encouraged by health departments in the UK and New Zealand. Scientific studies suggest that vaping nicotine is up to twice as effective as nicotine replacement products such as patches and gum.

“Vaping is not risk-free, but it is far safer than smoking as vapour does not contain the thousands of toxic chemicals and carcinogens which are created by burning tobacco,” said Dr Mendelsohn.

“Leading Australian medical Colleges have endorsed vaping nicotine as a legitimate and safer alternative to smoking for adult smokers who cannot quit with conventional therapies. These include the Royal Australian and New Zealand College of Psychiatrists [3]and the Australasian College of Physicians.[4]

“It is unscientific and irrational to allow the widespread availability of deadly combustible cigarettes and ban vaping nicotine which is far safer than smoking and another exit strategy for addicted smokers.

“The Government’s plan to ban the personal importation of nicotine from 1 January 2021 will increase smoking rates as many of Australia’s 450,000 vapers will have no choice but to return to smoking.

“It is morally wrong for the Government to deny smokers access to a far safer alternative which will improve their health.

“The Australian Government’s opposition to vaping nicotine will keep people smoking and lead to the unnecessary deaths of thousands of Australians.” 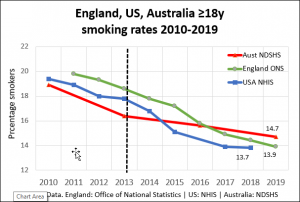 Adult smoking rates in England, US and Australia, including the NDSHS 2019