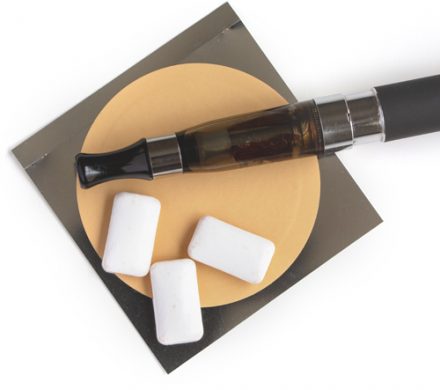 Vaping nicotine is almost twice as effective as nicotine replacement products like the patch and gum at helping smokers to quit, according to a game-changing study of nearly 900 treatment-seeking smokers in the UK.

The randomised controlled trial found that 18% of those using a nicotine-vaporiser (e-cigarette) were smoke-free after one year, compared to 9.9% of those using conventional products like nicotine patches or gum, alone or in combination.

The study was published today in the New England Journal of Medicine by Professor Peter Hajek and his team from the Queen Mary University of London.

Smokers were randomly assigned to one of two groups. One group was given a vaping starter kit and the other group was given conventional nicotine replacement products (NRT). All were given behavioural support.

Smokers randomised to vaping received a refillable second-generation device (Aspire One Kit) and a single bottle of tobacco flavoured nicotine e-liquid (18mg/ml). They could purchase another device if this one did not meet their needs and were required to purchase further e-liquid of their own choice.

The flexible design of this study reflects more accurately the real-world situation where users select a device, e-liquid flavours and a nicotine strength that works best for them.

Smokers randomised to nicotine replacement therapy could choose from a full range of products (patch, gum, lozenge, nasal spray, inhalator, mouth spray, mouth strip, and microtabs). Ninety per cent used combination therapy, which means using a patch as well as a gum, lozenge or other quick acting product. Combination NRT is the most effective pharmacological treatment for smoking and is as effective as varenicline.

Although evidence has been available from a wide range of other sources that vaping is effective (large population studies, user surveys, observational studies and widespread anecdotal reports) some health professionals have required robust randomised controlled trial evidence to be convinced. We now have that evidence.

Eighty percent of those who quit were still using their vaporiser after 12 months. Vaping is not risk-free, but it is far less harmful than smoking although more long-term evidence is needed. Continuing to vape can help prevent relapse to smoking and many ex-smokers find it enjoyable.

Past randomised studies (here) have used early model devices with low nicotine delivery a one-size-fits-all treatment and results have been modest. One used the devices in smokers who were not ready to quit (here).

According to Martin Dockrell, Tobacco Control Lead, Public Health England, 'This landmark research shows that switching to an e-cigarette can be one of the most effective ways to quit smoking, especially when combined with face-to-face support'.

Prof Robert West from University College London said the study was 'of huge significance. It provides the clearest indication yet that e-cigarettes are probably more effective than products such as nicotine gum and patches'.

We now have clear evidence that vaping with a modern, refillable device and a choice of nicotine e-liquids is an effective quitting aid and could be helpful for Australian smokers who are unable to quit with approved methods.

It is legal to use nicotine for vaping in Australia if the user gets a nicotine-prescription from a doctor.

*Quitting was defined as smoking no more than five cigarettes from two weeks after the quit date and was confirmed with a biochemical test.

The study was funded by the National Institute for Health Research and Cancer Research UK.