Smoking rates continue to stagnate or increase in Australia, while falling faster than ever in many other countries. This was confirmed in the recent release of Queensland smoking rates which had not changed over the past two years (1). One in six Queensland adults, or 15.8% per cent of the population still smoke.

‘This is very worrying’ said Associate Professor Colin Mendelsohn, chairman of the Australian Tobacco Harm Reduction Association (ATHRA). ‘Smoking remains the leading modifiable cause of death and illness in Australia and we are clearly losing the battle to contain it.’

‘Australia was a world leader in tobacco control for many years, leading the way with innovative strategies. However, this has all changed and new strategies are now needed’ Dr Mendelsohn said.

According to Dr Joe Kosterich, Director of ATHRA, ‘The difference between Australia and other highincome countries is Australia’s ban on tobacco harm reduction strategies, ie the use of safer nicotine products like vaporisers (e-cigarettes) for smokers who are unable to quit. Of the 37 OECD countries there are only three that ban vaping, Australia, Japan and Mexico’. (see below)

Smoking rates are dropping faster than ever in many of these other countries. For example, the adult smoking rate in the US announced this week is now at a historic low of 14% (5) and in England it is 14.9% (6). There is good evidence that vaping is contributing to this rapid decline. According to the UK Royal College of Physicians, vaping is at least 95% less harmful than smoking. (7)

The smoking rate in Norway fell by half from 22% to 11% between 2007-2017 due to the widespread uptake of Swedish snus, a low-risk, moist oral tobacco product, which is in effect banned in Australia. (9)

Heated tobacco products have led to a 25% fall in cigarette sales in Japan over the last two years. (10) These tobacco products are heated to release nicotine, but without combustion and are around 90% safer than smoking. However, they are also banned in Australia.

‘Australia is increasingly out of step with the rest of the world on tobacco harm reduction. Two out of every three smokers will die prematurely from smoking’ Dr Mendelsohn said. ‘We need to urgently make safer alternatives available for smokers who cannot quit. Not doing so is costing Australian lives.’ 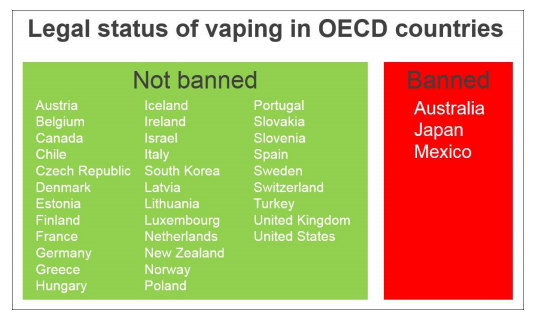 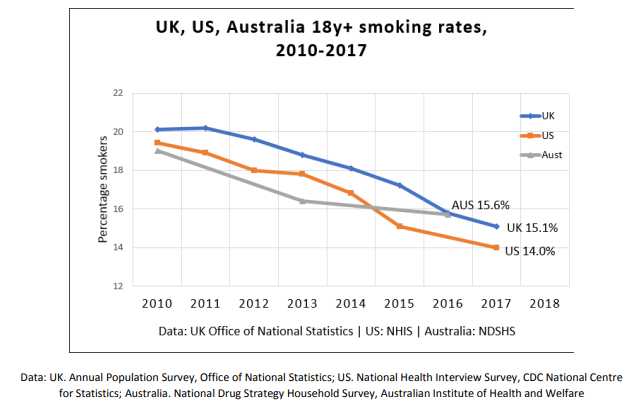 (1) The health of Queenslanders. Report of the Chief Health Officer, Queensland 14 November 2018 https://www.health.qld.gov.au/research-reports/reports/public-health/cho-report/current/full

ATHRA’s aim is to provide evidence-based information on safer alternatives to smoking such as vaping, so smokers who want to quit can make informed choices. ATHRA is managed by the Board of Directors, which consists of four independent medical practitioners and one consumer representative.

Directors receive no financial reimbursement or other benefit from ATHRA. None of the directors have ever had any financial or commercial relationship with any electronic cigarette or tobacco company.

ATHRA is funded by donations from businesses and the general public. ATHRA does not accept donations from tobacco companies or their subsidiaries. ATHRA accepts donations from the vaping industry. All donations are untied and all spending is at the discretion of the ATHRA Board of Directors, in line with the written objectives of the organisation and our Constitution.