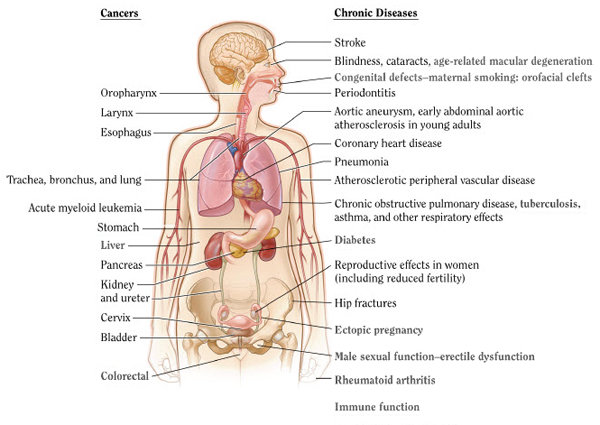 Source: The health consequences of smoking. A report by the US Surgeon General, 2014

The main causes of death in Australia from smoking are

Lung cancer is the leading cause of death from cancer in Australia in both men and women. Smoking causes 78% of lung cancer (84% in men, 71% in women).

Australian smokers have 17x the risk of lung cancer (24x for heavy smokers) compared to non-smokers. The risk increases with the number of years of smoking and the daily cigarette intake.

Smoking is known to cause 13 other cancers:

Smoking triples the risk of having a heart attack. Smoking increases blood clotting and narrows the arteries around the heart (atherosclerosis). The risk of a sudden death is increased by 2-3x that of a non-smoker. After a coronary stent or bypass, the risk of a further blockage is greatly increased.

Smokers are twice as likely to have a stroke as non-smokers. A stroke occurs when an artery to the brain becomes blocked or bleeds and part of the brain dies, resulting in paralysis, difficulty speaking, loss of mental functions or death. The risk of stroke increases the heavier and longer you smoke and especially if you are on the contraceptive pill.

The risk of blockage in the arteries is increased by about three times in smokers compared to non-smokers, especially in the legs and feet. This can lead to pain, gangrene and amputation. Smokers develop PAD 10 years earlier than non-smokers.

An aortic aneurysm is a weakening of the wall of the aorta, the main artery of the body. The wall can stretch and eventually burst and this is frequently fatal. Smoking increases he risk by 2-3x and quitting smoking approximately halves the risk of an aortic aneurysm.

Smoking increases the risk of developing asthma. People with asthma who smoke have worse asthma control, poorer response to treatment and accelerated decline in lung function.

Smoking reduces the blood flow to the penis and is a major cause of erectile dysfunction (impotence). Even passive smoking increases the risk. Smoking also reduces the sperm count.

Smoking causes increased wrinkling, and a pale, yellowish complexion. One study found that smokers appeared up to 4.7 years older than non-smokers. Smokers are also 80% more likely to develop psoriasis, a chronic disfiguring skin disease which affects about 3% of the population.

Smoking increases the risk of macular degeneration (the leading cause of blindness in Australia) by 2-3 times and the condition develops 10 years earlier in smokers. It also causes a 40% increased risk of cataracts (clouding of the lens) and is an important cause of thyroid eye disease (bulging eyes).

Smoking causes an increased risk of;

As well as the general effects of smoking, women are at increased risk of cancer of the cervix and ovary, infertility, dysmenorrhoea (painful periods) and premature menopause.

Smoking also increases the risk of breast cancer by 20-30%. However, more Australian women are now dying from lung cancer than breast cancer.

Smoking mothers and their babies are at substantial risk of serious health problems. The best time to quit is before you get pregnant so that your risk of complications is reduced to what it would be as a non-smoker.

Effects on the mother

Smoking approximately doubles the risk of

Effects on the child

Click here  to see an animated video which explains the risks further.

UK Royal College of Physicians, 2018
The Health Consequences of smoking. A report of the US Surgeon General, 2014