After years of steadily declining smoking rates, Australia is now losing the battle against smoking. The National Health Survey (1) released today by the Australian Bureau of Statistics has confirmed once again that smoking rates have stalled and the national target levels have not been met.

‘This is very disappointing’ said Associate Professor Colin Mendelsohn, chairman of the Australian Tobacco Harm Reduction Association (ATHRA). ‘The decline in daily smoking over the last 3 years was one third of the long-term trend since 2004’.

The daily smoking rate for adult Australians is now 13.8%, well above the 10% daily adult smoking target set for 2018 by the Council of Australian Governments (COAG) (6) in 2008’. (see table below) ‘Australia has the highest cigarette prices in the world, plain packaging and strict tobacco control laws. However, additional effective strategies are now needed to get things moving again’ Dr Mendelsohn said.

‘Smoking is a priority issue as it remains the leading preventable cause of death and illness in Australia, killing 19,000 Australian smokers prematurely every year.’

According to Dr Joe Kosterich, a Director of ATHRA, ‘The difference between Australia and other high income countries is Australia’s ban on tobacco harm reduction strategies, ie the use of safer nicotine products like nicotine vaporisers (e-cigarettes) for smokers who are unable to quit’.

‘Smoking rates are dropping faster than ever in many of these other countries. There is good evidence that vaping is contributing to this rapid decline’, he said.

‘Many smokers are simply unable or unwilling to quit smoking or nicotine with current treatments. We need to make acceptable, less harmful alternatives available to reduce the risks for these smokers’ he said. ‘Vaporisers allow smokers to enjoy an experience similar to smoking, with a greatly reduced risk of harm and reduced cost’.

‘Two out of three continuing smokers will die prematurely from a smoking-related disease, so reducing that risk is a priority’ Dr Kosterich said.

The harm from smoking is disproportionately experienced by disadvantaged populations with high smoking rates such as Indigenous people, people living with mental illness or substance use, low income people and the homeless 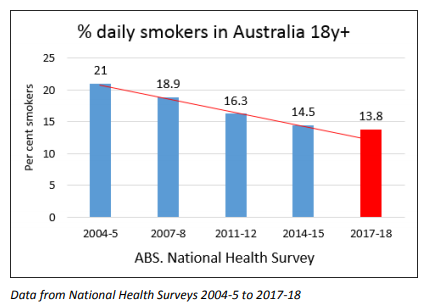 Australian Tobacco Harm Reduction Association (ATHRA) is a registered health promotion charity established to reduce the harm from tobacco smoking in Australia. ATHRA aims to raise awareness of less harmful alternatives for adult smokers who are otherwise unable to quit. ATHRA’s broader goal is to encourage the complete cessation of tobacco smoking in Australia. For more information, visit www.athra.org.au.

ATHRA is funded by unconditional donations from businesses and the general public. It does not accept donations from tobacco companies or their subsidiaries. None of the directors has ever had any financial or commercial relationship with any electronic cigarette or tobacco company.