Low levels of carbonyls such as formaldehyde, a known carcinogen (cancer-causing agent), are often detected in vapor due to the thermal breakdown of propylene glycol and vegetable glycerine.

However, subsequent tests confirmed that these high levels were caused by unrealistic vaping conditions using excessively high-power settings that overheated the e-liquid. This would create an unpleasant burnt taste (‘dry puff’) which vapers would avoid under normal use. However, under normal vaping conditions by humans with modern devices, the level of formaldehyde is about 1-5% the level of smoking.
As mentioned earlier, the overall cancer risk from long-term vaping has been estimated at <1% of the risk from smoking. 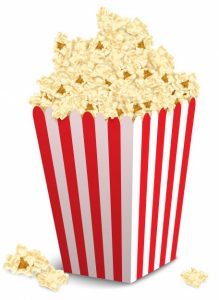 The myth of ‘popcorn lung’ has been the subject of many sensational headlines. However, the risk of vaping is almost non-existent.

Popcorn lung (bronchiolitis obliterans) is a serious lung disease that has been found in some people working in popcorn factories. It is thought to be caused by heavy exposure to a chemical called ‘diacetyl’ which is used to give popcorn a buttery flavor.

Very low levels of diacetyl have been found in some aerosols, at levels 100-750 times LESS than in cigarette smoke. However, there has NEVER been one reported case of popcorn lung from smoking or vaping.

Even though the health risk from diacetyl is almost non-existent, responsible manufacturers are removing diacetyl from their e-liquids and many are now labeled ‘diacetyl-free’.

A further review of the popcorn lung myth by Professor Michael Siegel is available here.

Tobacco cigarettes are a significant fire hazard, but there have also been reports of vaporisers overheating or catching fire. These episodes are given considerable media attention, but are actually quite rare.

According to the London Fire brigade, although four times as many people smoke as they do vape, there are 255 times more smoking-related fires than fires due to vaping, meaning vaping is a far safer option.

Battery safety is being continually improved. Protection can be built into the battery, into the charging appliance, or into the electronics to reduce the risk.

Women should try to stop smoking before getting pregnant wherever possible. Quitting when pregnant is more difficult and certain medications to help you quit cannot be used in pregnancy.

The preferred quitting methods in pregnancy are professional counselling and nicotine replacement therapy, ie nicotine patches, gum, lozenges, inhalator or mouth spray. If you are not able to quit smoking with the available treatments you could consider using a vaporiser.

Little research has been conducted into the safety of vaping in pregnancy, however it is likely to be significantly less harmful to you and your baby than cigarettes. If using a vaporiser helps you stay smokefree, it is much safer than continuing to smoke.

Nicotine from smoking can affect the baby’s brain and lungs and reduce the baby’s growth. However, on its own there is little evidence of harm. Nicotine gum, patches etc are approved for use in pregnancy and one study found healthier babies when they were used. The main harm to the baby comes from the thousands of chemicals in tobacco smoke.

Even small amounts of smoke are harmful to you and the baby. If you are using an e-cigarette, it is important to try to stop smoking completely. If possible, it is best to stop vaping if you can avoid taking up smoking again.

For more information
Use of electronic cigarettes in pregnancy. A guide for midwives and other healthcare professionals. Challenge Group 2016

Nicotine is toxic in high doses like many household chemicals. However, most cases of intentional or accidental nicotine poisoning involving nicotine e-liquid have resulted in prompt vomiting and overdoses rarely cause serious harm. According to Public Health England,

There is no significant risk of nicotine poisoning to the user as vapers regulate their nicotine dose on a puff by puff basis.

E-liquid should always be stored safely out of the reach of children and pets and kept in a childproof container.