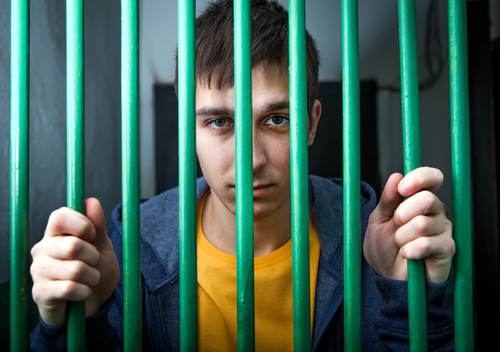 It is legal to import nicotine into Queensland

Queensland vapers can now be reassured that it is legal to import and use nicotine e-liquid if holding a prescription.

After repeated challenges by ATHRA, Queensland Health has now admitted that importation of nicotine to stop smoking is legal under the TGA Personal Importation Scheme (see below). Vapers need a prescription from their doctor to qualify.

Queensland Health has misled the public for several years by insisting that state laws (HDPR 1996) override Commonwealth legislation, making it illegal under any circumstances to import or possess nicotine.

Queensland Health has intercepted personal nicotine imports and threatened and intimidated vapers for several years. For example, below is letter from Qld Health to a vaper last year advising that their nicotine order was confiscated and threatening a $9,752 fine. There have been many similar confiscations of legally purchased products. 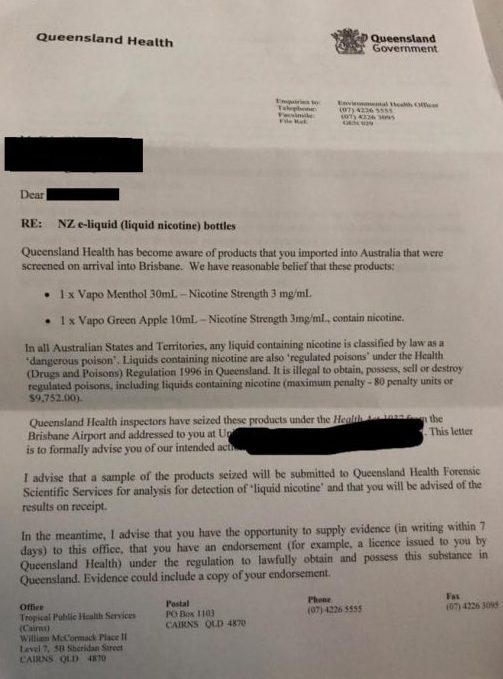 There was an episode in 2016 in which a regular vape meeting was cancelled after threats by Qld Health and the Qld police. The group, Brisvape had 1,600 members and met monthly in Brisbane to discuss vaping and share information.

Even after acknowledging that nicotine imports are legal, Qld Health still has on its website here that (9 July 2018):

This is misleading. Under the TGA Personal importation scheme it is legal to import, possess and use nicotine e-liquid for quitting smoking.

Qld Health even asks the public to dob-in-a-vaper and report ‘possession of electronic cigarettes containing liquid nicotine’ whether the vaper has a prescription or not.

What is the TGA Personal Importation Scheme?

The TGA Personal Importation Scheme is a federal government scheme under which Australians can legally import goods for treatment (such as nicotine e-liquid) which are otherwise not approved in Australia.  Under the scheme, it is legal to import 3 months’ supply of nicotine for personal use if prescribed by a doctor for quitting or reducing smoking. It is also legal to possess and use the nicotine e-liquid.

The Personal Importation Scheme applies in all states and territories in Australia.

Why is it important?

Electronic cigarettes with nicotine are being used as a safer alternative to smoking tobacco by many Queenslanders who have been unable to quit smoking with conventional treatments.

Switching to vaping leads to substantial health improvements and can be life-saving. According to the UK Royal College of Physicians, long-term vaping is at least 95% safer than smoking. Millions of smokers have quit overseas by switching to vaping.

Vapers whose nicotine supplies are confiscated or are intimidated into not vaping are at high risk of relapse to smoking.

9 Replies to “It is legal to import nicotine into Queensland”

There's definately a lot to find out about this issue.
I really like all of the points you have made. https://quickburnergarcinia.org/

Going to ask my doctor for prescription in the morning any advice. I am in qld

Seeking your advise to find out that I will be traveling to Goldcoast and Brisbane end of this month and I wondering whether I can bring in my personal Used vaporizer and some e-liquid (small quantity) into the state ?

Thanks for your help.

It is legal to possess and use e-liquid in Queensland if you have a prescription from an Australian doctor.

I dabbled in Vaping years ago and was very hopeful and pleased with the initial results of doing so, then my home was robbed and they took my Vaping gear that took a long time to import, i immediately went to the store and bought the highly taxed cigarettes as i was under stress and no longer had my vape substitute (while the Police where fingerprinting my house to find the thieves). This was a big setback for me, it took a few years later for me to get into Vaping again and try vaping and I am pleased to state that i have been just over a year now without a combustible cigarette due to Vaping with Nicotine. I got me heart health in order, my stress improved and my Budget reasonable… I have tried the Patches which made me sick both at the skin contact area and nausea caused by the patches, gum always made me want a cigarette as it just made my mouth and throat tingle like i had smoked a packet but without the smoking like experience ALL smokers are used to enjoying. I vape a much reduced level mg of nicotine but i guess it may not be equally comparable (Smoked 12mg cigarettes, but vaping 3-6mg feels right in comparison) Vaping is something not to be dismissed, we are human and not just a drug addict if we are smokers, Vaping can provide a much healthier way to get the experience and the drug component of our addiction, I am much healthier since vaping, I can ride a bike for hours and never wheeze anymore for example. Vaping IS the answer for long term smokers, not all can adjust to it easily, but it beats all other methods i have tried and heard of, and the closest substitute cigarette experience that is much more convenient if only more available to Tobacco Quitters.

Weird is it not? The government wants you to quit or may be not?? It is so much better for us but it will reduce the revenue.
What’s your opinioon?

Current tangible costs of smoking include:

$5 billion in lost productivity and worker absences
$2 billion for family members caring for someone with a smoking-related disease
$6.8 billion in healthcare costs, including the cost of 1.7 million hospital admissions to treat smoking-related conditions.

The government does not profit from having a smoking tax. It is meant as a deterrent due to the financial impact it has on the economy.
If people agreed that by smoking they are ok with not getting free healthcare for the possible treatment of any resulting illness then we wouldnt have to pay $60 for a packet. Fair trade really, the amount of money you would save you could put it away for your upcoming cancer treatment anyway.

Is it really legal to import nicotine e-liquid in Queensland? Even after the ban in 2021? Would appreciate your clarification.