An update on the lung disease outbreak in the US

The mysterious lung disease in the US is almost certainly due to vaping contaminated THC (the psychoactive ingredient in cannabis) and has nothing to do with vaping nicotine to stop smoking.

The Centres for Disease Control and Prevention (CDC) has reported that most victims are using THC oil and most tests have identified significant amounts of Vitamin E Acetate.

Vitamin E Acetate is an oily agent found recently in black market THC products. It creates a greasy layer in the lungs when inhaled causing severe lung inflammation. Examination of lung tissue has found 'macrophage cells' full of oil and confirmed the diagnosis of 'lipoid  (fatty) pneumonia' in many cases.

According to the CDC, there are now about 450 people affected by this outbreak and five people have tragically died. Most cases are teens or young adults who are more likely to engage in this risky behaviour.

Could this be due to regular nicotine vaping?

ATHRA director Colin Mendelsohn explains why nicotine vaping is not the cause of lung disease, on the Channel 9 Today Show on 7 September 2019.

Millions of people have been vaping nicotine for over a decade without any evidence of serious lung damage. Suddenly there is an outbreak of clusters of an acute lung disease in people who are vaping THC. No cases have occurred outside the US. Clearly something has changed.

'Almost all cases so far have been linked to vaping illicit THC liquids. Not a single case of nicotine vaping has been identified as causing any concern'

There is no oil in commercial nicotine solutions purchased from reputable businesses and it is impossible for regular nicotine vaping to cause these lung changes. Nicotine is dissolved in propylene glycol (PG) and vegetable glycerine (VG) which are both alcohols and not oils. Some of the victims of the outbreak were also vaping nicotine, but there are no identified cases of nicotine e-liquid playing any role.

Specifically, THC liquid has been purchased in illicit 'vape carts', ie cartridges of THC, which are contaminated with Vitamin E oil. These 'carts' are usually purchased separately and are then attached to a vape pen to heat the liquid into an aerosol (see below). 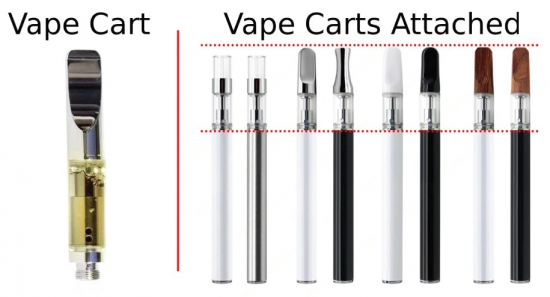 Should you continue vaping nicotine?

The outbreak of lung disease from vaping illicit THC products is not relevant for the 250,000 Australian vapers who use nicotine or  flavoured solutions to stop smoking.

Vaping commercially purchased nicotine solution from a reputable supplier is dramatically safer than smoking and it would be a tragedy if vapers returned to smoking as a result of this unfortunate outbreak.

However everyone should always avoid purchasing any vaping products on the street, especially THC oils.

According to Professor Paul Aveyard from Oxford University,

'While vaping does produce some toxins, those are at significantly lower levels than seen in cigarette smoke.  If vaping typically caused severe lung damage, we’d have seen many more cases in people who smoke, which we have not.'

"It is always preferable to vape than to smoke. Today’s reports should not change that advice.”

Many media reports have carelessly claimed that this outbreak is due to 'vaping', implying that people vaping nicotine to quit smoking are at risk. This is incorrect and extremely misleading.

'However, it is important to understand that it is not the 'vaping' which is harmful, but the drug used. Illicit street drugs have no quality or safety control and should be avoided'

Sadly, some anti-vaping activists have deliberately exploited the panic around this outbreak to create fear and spread misinformation about vaping.

Nicotine purchased from reputable online suppliers such as the following retailers in New Zealand have high production standards and provide a high quality product.

British vapers are safe, claim health experts after deaths in US. The Guardian, 8 September 2019

Science Media Centre. Expert reaction to paper and commentary on recent cases of harm through vaping in the US. 6 September 2019

My mom has been throwing a big hissy fit about this outbreak…. I still vape and have no problems and I buy from a store….. further more when I first started vaping my mom was like don’t do it b/c they put inbalmming fluid in the liquid and your pre-imbalmming yourself…..lol….. my mom has a really crazy imagination.

Thank you for doing so much work to help the vape community.

vaping is costing me approximately $30 a fortnight, cigarettes was costing me $40 a day, im sure cigarettes kills, maybe also vaping kills, these days everything kills, what is good today, it will be deadly tomorrow, since i started vaping, now i have few dollars extra in my pocket, $40 FOR A PACKET OF SMOKES, stop ripping people, you bloody thieves, Im sure Phillip Morris is behind all this crap, they will do anything to stop the vaping, they are losing Millions of $$$$$$$$$$$ due to vaping,