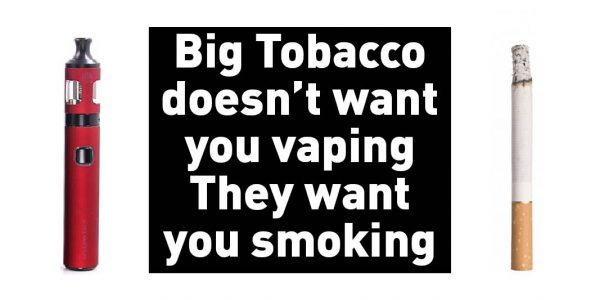 How opponents of vaping aid and abet Big Tobacco

Many opponents of vaping think it is a big tobacco conspiracy to keep people smoking and hook more kids. The reality is that vaping is a huge and disruptive threat to the tobacco industry. Campaigns against vaping support the cigarette market and are a huge gift to Big Tobacco.

For over a century, tobacco companies have run an incredibly lucrative cartel, selling an addictive product. Tobacco stocks have been the best performing segment of the stock market for over a century in spite of all-out tobacco control activities. 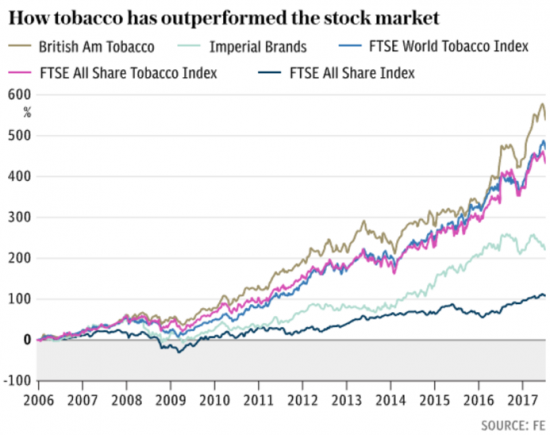 It costs 28 cents to make a packet of cigarettes in the US and tobacco companies have aggressively raised prices at will. The industry has had a licence to print money and would dearly love to maintain the status quo for as long as possible.

The biggest threat to the tobacco cartel was the development of the modern e-cigarette in 2003 by a Chinese pharmacist, Hon Lik. Vaping is a far safer substitute for smokers who are unable to quit, delivering the nicotine that smokers are addicted to along with the hand-to-mouth ritual and sensations of smoking and smokers are switching in droves to the less harmful alternative.

In countries where vaping is available such as the US and UK, combustible sales volumes and smoking rates are falling faster than ever. Vaping is now the most popular quitting aid globally and the most effective quitting method, twice as effective as nicotine replacement therapy, such as patches and gums.

The tobacco industry realised rather late that vaping could lead to its own ‘Kodak moment’. Lorillard purchased the blu brand in 2012 and the industry has been trying to catch up ever since, buying established brands and developing its own products.

However, it may have been too late. The widespread dissemination of vaping nicotine has devastated tobacco stocks. In early 2017, the combined value of the FT500 tobacco companies (PMI, BAT/Reynolds, Altria, Japan Tobacco, Imperial and ITC) surpassed US$700 billion. In September 2019, the combined value was down to US$372 billion, an unprecedented decline. 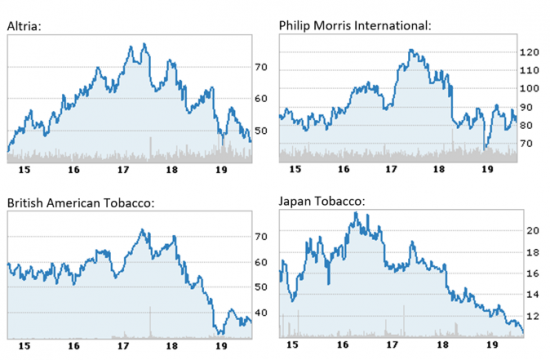 Big Tobacco currently controls no more than 25% of the global vapour market. Its main focus is on heated tobacco, another reduced-risk product which heats a tobacco stick to release nicotine without the toxic chemicals of combustion.

Tobacco investors are clearly spooked by vaping. Good news in the vaping industry leads to a fall in tobacco stocks.

For example, steep falls in stock prices occurred after July 2017 when the FDA announced its plan to encourage vaping and reduce nicotine levels in cigarettes.

As a result of the recent concerns about youth vaping and the outbreak of lung injuries and deaths in the US (attributed to vaping contaminated black-market cannabis), tobacco stocks are rising once again. 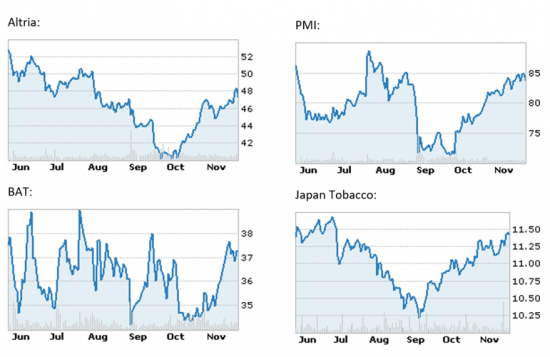 Health organisations such as the Cancer Council and Australian Medical Association have an understandable antipathy for Big Tobacco and want to see it punished. However, their continuous opposition to vaping is perversely having the opposite effect. They are protecting the industry from competition from a disruptive technology which could help eliminate the scourge of combustible tobacco.

Harsh restrictions, such as on flavor bans and the requirement for a doctor’s prescription, will make vaping a less attractive proposition. Fewer smokers will switch to vaping, the much safer alternative. Many vapers will return to smoking.

Highly restrictive regulatory barriers also favour the tobacco industry. For example approval by the Therapeutic Goods Administration is enormously costly and onerous. This is a gift to Big Tobacco with its enormous cash flow, and and will eliminate most of the small to medium players in the market.

This opposition by governments, health charities and medical organisations to vaping will undermine the best opportunity in decades to eliminate deadly cigarettes. Big Tobacco can resume its lucrative cartel and people will continue to die from smoking. With enemies like these, Big Tobacco does not need any friends.

Published in The Spectator Australia, 21 January 2020 by Colin Mendelsohn