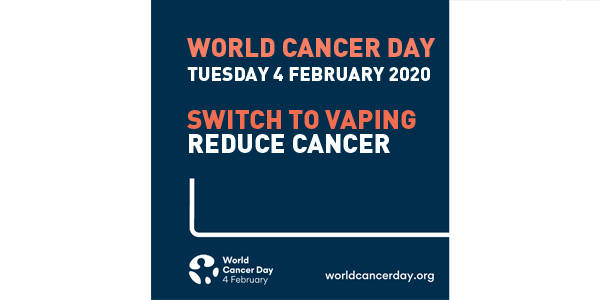 TODAY IS WORLD CANCER DAY. If you are a smoker, the best way to reduce your risk of cancer is to quit smoking. If you can’t quit, the next best thing is to switch to vaping.

Smoking is the leading cause of cancer in Australia and causes 1 in 5 cancer deaths - about two thirds are due to lung cancer. [AIHW 2019]

The good news is that the risk of cancer falls when you quit smoking or switch to vaping. For example, after quitting smoking, your risk of lung cancer is reduced by 50% after 10 years and the risk continues to decline over time. [Fry 2013] 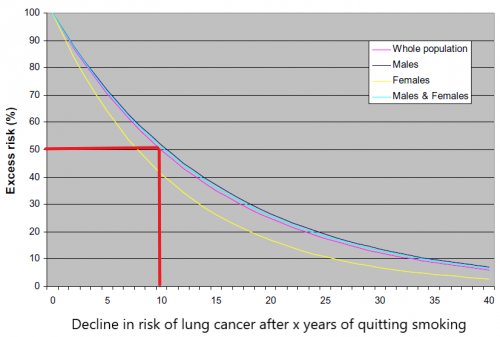 Cancer risk much less from vaping

Several studies have concluded that the risk of cancer from vaping is far less than smoking. For example

The reason for the low cancer risk from vaping compared to smoking is that most of the cancer-causing toxins (carcinogens) in tobacco smoke are absent from vapour. Those present are at very low levels, mostly <1% of the levels in smoke. [PHE 2015]

For example the most potent carcinogens in smoke, 1,3-butadiene and acrylonitrile, are almost entirely absent from vapour. [Stephens 2017] Major carcinogens Polycyclic Aromatic Hydrocarbons) [Farsalinos 2014] and Tobacco Specific Nitrosamines [Goniewicz 2013] are usually absent from vapour or present only in trace amounts.  Levels of heavy metal are extremely low and below regulatory safety limits. [Farsalinos 2015]  Aldehydes (formaldehyde, acetaldehyde) are present at very low levels in vapour. [Goniewicz 2013]. High levels have been found in poorly conducted laboratory tests which do not reflect normal use. [Farsalinos 2017]

As a result, the levels of toxins in the bodies of smokers who switch to vaping are substantially reduced compared to continuing smokers. [Shahab 2017]

Nicotine does not cause cancer

There is no evidence that nicotine causes cancer in humans

What does Cancer Council Australia say?

CCA is a respected organization which does a lot of good work in public education, support for cancer sufferers and research.

However, its approach to vaping is not consistent with the evidence or its mission to prevent cancer, and may result in more cancer in Australia

CCA's 2016 position statement on vaping is long out-of-date and includes no references to any studies after 2014. [CCA 2016]

In 2018, ATHRA sent a detailed letter to the CEO of Cancer Council Australia outlining the latest evidence on vaping. CCA was unmoved.

ATHRA requested meetings with the CEO Sanchia Aranda (2018) and Paul Grogan Director, Public Policy and Knowledge Management (2017). Both declined to meet us.

It’s time that CCA reviewed it’s outdated position statement on vaping and brought it in line with the latest evidence. The lives of many Australian smokers depend on it.

If you are concerned about this, you can contact CCA by email info@cancer.org.au or on twitter at @CancerCouncilOz.

Campaigning for cancer. The Spectator. 11 October 2017