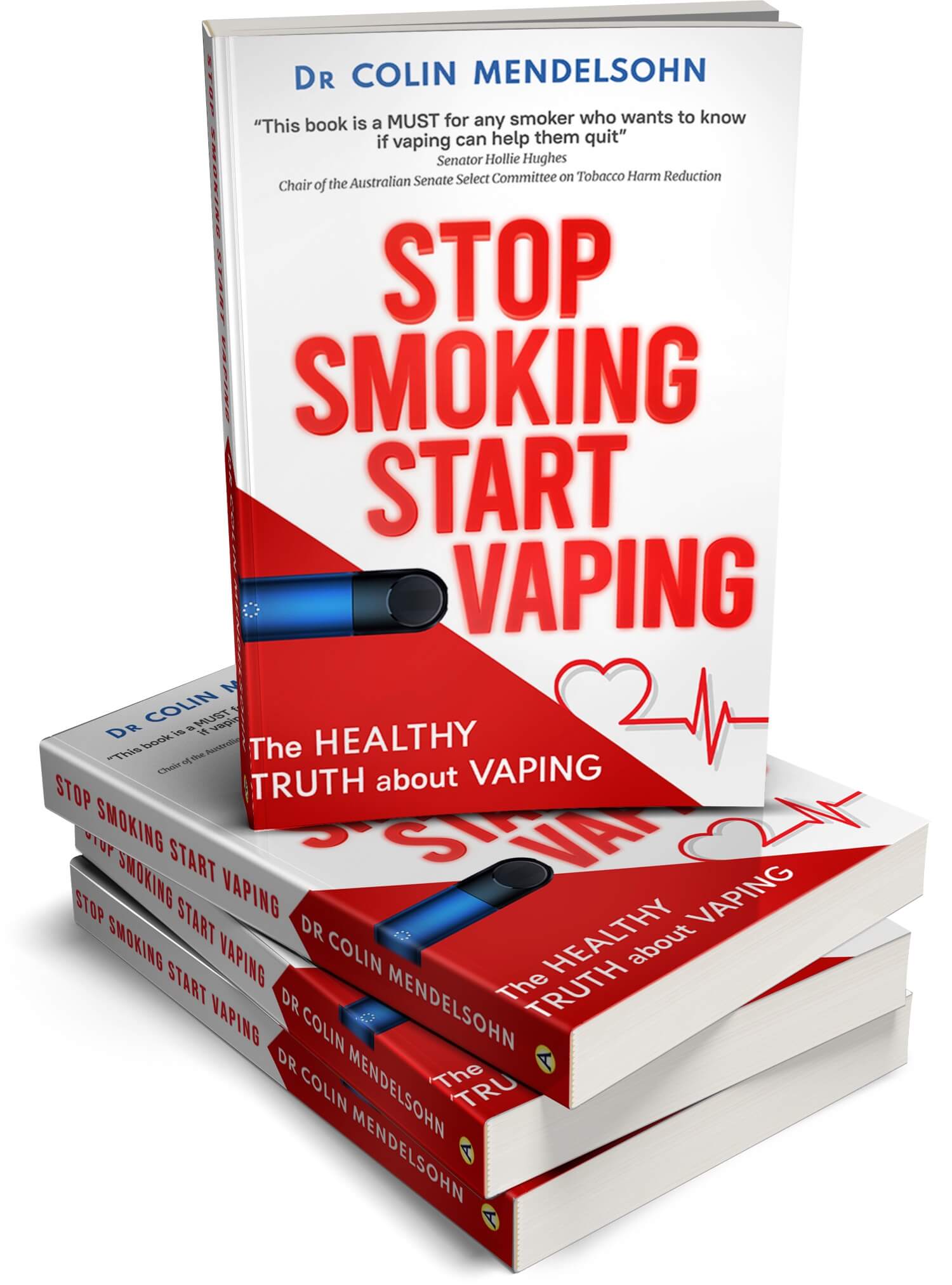 Why you should Stop Smoking and Start Vaping

Founding Chairman of ATHRA, Dr Colin Mendelsohn, has written a book Stop Smoking Start Vaping to help you separate the facts from the fiction. The book explains what vaping is and the scientific evidence that underpins it.

It also provides a practical guide to getting started. What device should you buy, how much nicotine do you need, what are mouth-to-lung vaping and ‘nicotine salts’ and how do you vape safely?

Finally, the book explores the controversies about vaping. Why is it opposed by many health and medical authorities in Australia? What are the hidden reasons underpinning their objections? How should vaping be regulated and what can we do to accelerate the uptake of vaping?

Vaping is unique as a quitting aid. As well as providing the nicotine smokers need, it replicates the hand-to-mouth habit and is a satisfying and far less harmful substitute for smoking. When smokers quit, they often miss the smoking ritual, a ciggie with a drink, the sensation of smoke in the throat, the social interaction with other smokers.

However, vaping provides all that. When the urge to smoke occurs, just pick up your vape instead.

It is no surprise that vaping is the most effective single quitting aid available according to the prestigious UK National Institute for Health Research.

Almost all the harm from smoking is caused by a poisonous mix of over 7,000 chemicals from burning tobacco. Vaping involves heating a liquid (without combustion) and there is only a tiny fraction of the chemicals present in vapour and at much lower doses.

Of course, it is best to only breathe fresh air, but as vaping nicotine is almost exclusively used by smokers, any risk should be compared to the risk of continuing to smoke.

Nicotine is one of the most misunderstood drugs. Although it is the main cause of addiction to cigarettes, ‘nicotine use per se represents minimal risk of serious harm to physical health’, according to Public Health England and many other authorities.

In spite of what you may read, nicotine does not cause cancer or lung disease and plays only a minor role in heart disease.

Vaping opponents raise legitimate concerns of possible risks from vaping. However, on closer inspection, most of these are exaggerated and are not based on sound evidence.

For example, youth vaping is rare and in most cases is experimental or short term. Most youth vapers are already smokers and studies are now showing that vaping is displacing deadly smoking in young people. Vaping opponents will tell you nicotine causes harm to the adolescent brain but there is no evidence for this in humans (only mouse studies).

Long-term health risks are another furphy. Like all new products, the precise long-term health effects of vaping nicotine will not be known for decades. However, it is beyond reasonable doubt that long-term use will be much safer than continuing to smoke which kills up to 2 in 3 long-term users. The UK Royal College of Physicians has estimated that the long-term risk of vaping is unlikely to be more than 5% of the risk of smoking.

Other fears are proving to be unfounded. There is no evidence that vaping is ‘renormalising’ smoking and uptake by non-smokers is rare, <1% in national surveys.

The silliest objection is that ‘Vaping is a tobacco company plot to keep people smoking’. The tobacco industry did not invent vaping and vaping is a huge disruptive threat to the industry just like digital cameras were to Kodak. The tobacco industry controls no more than 20% of the global vaping market and would prefer to continue its monopoly of highly profitable cigarettes.

The evidence is clear,

Smokers who switch to vaping have improved health, are exposed to fewer toxins, feel and smell better and save lots of money.

Stop Smoking Start Vaping provides a step-by-step guide to making the switch. It explains what devices are best for beginners, how much nicotine to use, where to buy vaping products and how to vape safely.

According to Emeritus Professor John Britton, former chair of the Tobacco Advisory Group of the Royal College of Physicians

If you are a smoker, and especially a smoker who hasn’t tried vaping, read this book, and try it now.’

If you are not a smoker, buy it as a Christmas present for someone who is. You could save their life.

One Reply to “Why you should Stop Smoking and Start Vaping”

Awesome to have some Australian representation in the vaping community with regards to published and accessible books.

Keep up the great work ATHRA and Colin!